Cuba will spend about US$185 million (135 million EUR) to upgrade more than 200 resorts, golf courses, marinas and other facilities to attract tourists to the island. 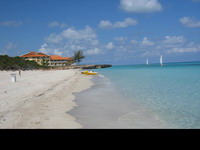 The government has said the number of visitors to island dropped by about 100,000 last year to 2.2 million, hitting the communist nation's leading source of income. Washington's 45-year-old trade embargo prohibits Americans tourists from coming to Cuba and chokes off most trade between the countries.

Tourism Minister Manuel Marrero announced the development plan last week at a tourism fair that was closed to the international press. The plan detailed this week in Opciones, a state-run newspaper for foreign investors, will run through 2010 and seeks to make Cuba more competitive.

Some US$162 million (119 million EUR) will be used to upgrade non-hotel facilities, such as golf courses, yacht clubs and theme parks. Other funds will be used to build 50 boutique inns around the country in addition to 10 already under construction and to improve the country's outdated highways, Marrero said.

Opciones did not say how many tourists have visited Cuba so far this year, but quoted Marrero as saying that "in 2007, for the fourth consecutive year, the number will be greater than 2 million visitors."

Many international visitors complain that Cuba is excessively expensive, especially because of a tax on required currency exchanges.

Tourism, which generates some US$2 billion (1.5 billion EUR) annually in Cuba, became a major source of income in the 1990s following the Soviet Union's collapse and the loss of critical aid and trade.