Poland's education minister called for a ban on the "propagation of homosexuality" in the country's schools. 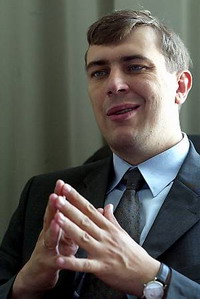 Amendments to the education law would require school directors to scrap or ban any activities that promote "homosexuality, pornography or other phenomena violating moral norms," said Education Minister Roman Giertych.

He unveiled his proposal at the education ministry less than a month after the European Parliament passed a resolution sharply criticizing senior Polish officials for declarations "inciting discrimination and hatred based on sexual orientation."

However, the minister - who leads the ultraconservative League of Polish Families, a junior partner in Poland's governing coalition - insisted Wednesday that his proposals "do not discriminate against anyone."

"It is only to protect youth from the propagation of views that threaten marriage, threaten family, and threaten the duties of school, which are to prepare one to fulfill family duties and the duties of a citizen," he said.

The proposal is vague on what exactly would constitute propagating homosexuality.

Giertych defined it as "every action that is dependent on the public presentation of a certain belief with the intention of convincing others to that viewpoint."

Giertych said he was sending the draft amendments to other government ministries Wednesday for consultations.

He said the whole government backs the proposed changes, and he expects enough support for them to pass easily in parliament.

Robert Biedron, the head of Poland's Campaign Against Homophobia, condemned the proposals, calling them "fascist projects."

"It is frightening that in the middle of Europe there is a government that instead of fighting against discrimination, heightens discrimination," Biedron said.