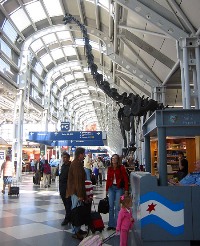 Documents obtained by The Chicago Tribune revealed that inspectors with the U.S. Federal Aviation Administration found multiple violations by the Chicago Department of Aviation, the O'Hare Modernization Program and O'Hare expansion contractors.

The FAA said there was no immediate threat to passenger safety in the incidents, which occurred between June and October 2006.

According to the documents, violations included storing construction gear in runway safety areas that are supposed to stay clear, and leaving mud and dirt in areas where airplanes taxi. Contractors accidentally cut power cables at least seven times between June and October, resulting in equipment failures for navigation, weather, communications and safety-related systems, the documents show.

"What occurred is unacceptable and it is not going to be tolerated," said Rosemarie Andolino, executive director of the O'Hare expansion project.

The Tribune reported that Chicago Aviation Commissioner Nuria Fernandez received a warning letter from the FAA saying the city's aviation department "does not have sufficient and qualified personnel" to comply with the FAA requirements and the city "is not equipping personnel with sufficient resources" to satisfy the regulations.

Fernandez said the violations happened during the first year of major construction on the runway expansion project.

"This is the largest airport construction project in the world, also happening at the world's second-busiest airport. Things are prone to happen, but I was very confident we could deal with them, and we did," Fernandez said.

The $15 billion (EUR11 billion) expansion project, which will reconfigure runways, is expected to reduce delays at the airport by 68 percent, the FAA has said.

"The feeling is that the city is definitely working to correct the situation," FAA spokeswoman Elizabeth Isham Cory said. "But we are watching very closely to maintain safety on the airfield."