Cruise ship runs aground, takes on water off Alaska coast as passengers evacuate

A riverboat-style cruise ship ran aground off the Alaska coast, forcing an evacuation of more than 200 passengers before it could move again with a Coast Guard escort. 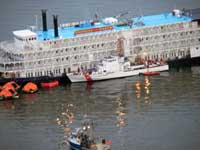 Cruise ship runs aground, takes on water off Alaska coast as passengers evacuate

All passengers were evacuated from the Empress of the North by 7 a.m. on Monday and returned to Juneau aboard a ferry. One person was taken to a hospital for observation, a city employee said.

Passengers said they were jolted awake early Monday when the ship hit the rocks in a remote part of a southeast Alaska archipelago in the middle of night. They were ordered to don lifejackets and gather in the ballroom, where a singer and piano player entertained them with songs including "Take Me Out to the Ball Game" as they waited for rescue.

Mary Zanis Crosby, 83, of Seattle, said that "the rumble was horrendous" when the ship ran aground, but that she was never frightened during the ordeal.

"I considered it an adventure although I'd have rather been doing something else," she said with a laugh.

The Empress of the North had 206 passengers and 75 crew members aboard when it sent out an emergency radio message around 2 a.m., the Coast Guard said.

When Coast Guard helicopters reached the area, the vessel was listing at the southern end of Icy Strait, about 50 miles (80 kilometers) southwest of Juneau, and it began taking on water, said Petty Officer Christopher D. McLaughlin at the Coast Guard base in Kodiak.

As the ship's pumps worked to remove the water, the passengers were transferred to other boats in the area and then to the ferry to be taken to Juneau.

The fishing vessel Evening Star was about five miles (8 kilometers) away, finishing a halibut trip, when its crew heard the mayday call.

"They were laying over pretty heavy to one side," Evening Star captain Blake Painter told CNN. He said his boat pulled along side and took 33 passengers, while another fishing boat pulled up and took a few more. A Coast Guard cutter and a few more boats had arrived about an hour later, and all the passengers ware taken off safely, he said.

The ship left under its own power and arrived in Juneau with a Coast Guard escort about 10 hours after the grounding, Lane said.

It was not immediately clear why the ship ran around, McLaughlin said. It was drizzling in Juneau but the seas were calm.

The National Transportation Safety Board was to investigate.

The Empress of the North is operated by Majestic America Line of Seattle. The ship has 112 state rooms, a three-story paddlewheel and galleries featuring American Indian masks and Russian artwork, including Faberge eggs, according to its Web site.

The 360-foot (110-meter) ship is less than half the size of the average cruise ship in the Caribbean and is dwarfed by most other cruise other ships off the Alaska coast.

The grounding occurred on the second day of a seven-day cruise, said Dan Miller, a spokesman for Majestic America.

The American-built ship is billed by the company as the only overnight paddlewheel vessel in use on Alaska cruises. It also is used on cruises on the Columbia River between Washington state and Oregon.

The Empress of the North has had other problems since it began operating in mid-2003. In October 2003, it hit a navigation lock on the Snake River in Washington. It has also run aground at least twice before - once after developing steering problems on the Columbia River, and once on a sandbar near Washougal, Wash., as it tried to avoid a barge.