Everything is in place for gala celebrations marking the 40th anniversary of the moment many Israelis see as their most glorious - the dramatic unification of Jerusalem under their control in the 1967 Middle East war. 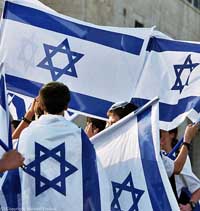 But the guest list keeps getting shorter, because the world doesn't recognize Israel's claim to the whole city.

The anniversary celebrations, scheduled for Tuesday and Wednesday, are underlining the controversy surrounding Israel's hold on the fractious city it calls its eternal, undivided capital.

Because of the dispute over Jerusalem - one of the most explosive aspects of the Israel-Palestinian conflict - foreign countries don't maintain embassies in the city, even though it is the seat of Israel's government, pointedly preferring the coastal metropolis of Tel Aviv.

On Sunday, as the government geared up for the celebrations, the European Union announced its representatives wouldn't be coming to a ceremony at the Israeli parliament. EU countries believe the city "should serve as a capital for two states," a spokesman said.

The U.S. embassy announced that Ambassador Richard Jones would also skip Monday's ceremony, and that no other American representative would be coming. Altogether, only around 20 of the 100 ambassadors invited to the official event will attend, according to Knesset spokesman Giora Pordes. He wouldn't say which ones.

"We are disappointed and unhappy that some countries have decided not to take part. United Jerusalem is the capital of Israel," said Mark Regev, spokesman for Israel's Foreign Ministry.

But some Israeli lawmakers criticized the decision to invite foreign diplomats to the event at all, local media reported, saying it was obvious they would have to decline.

Mustafa Barghouti, the Palestinian information minister, praised those refusing to attend, saying the celebrations "are in violation of international law."

In June 1967, Israeli paratroopers fought their way into the Old City and advanced to the Western Wall, the holiest site where Jews can pray, which had been under Jordanian control and off-limits to Jews for 19 years. For Israelis, the event has attained mythic status, signifying Israel's lightning six-day victory over the armies of Egypt, Jordan and Syria and the extension of its control over the ancient city at the heart of the Jewish faith.

The elation of that first moment has since given way to ethnic and religious tensions and to the day-to-day minefield of governing one of the world's most complicated cities.

Today, Jews are two-thirds of the city's population, and Arabs make up the rest. Jerusalem's Arabs have long charged that Israel discriminates against them in urban planning, building new Jewish neighborhoods in east Jerusalem to cement its control while neglecting basic services in Arab areas.

That has been exacerbated by the Arabs' nearly total refusal to take part in municipal elections, which they fear would mean acknowledging Israel's control, but which has also meant surrendering any clout they might have wielded at City Hall.

Jerusalem's demographic trends have added to the city's problems.

For years, secular Jewish Israelis have been moving away from the city, fleeing what many see as an oppressive religious presence and drawn by the more thriving job market in Tel Aviv and its suburbs.

That has left the city heavily ultra-Orthodox and Arab - both populations with large families and high rates of poverty and unemployment. In a sign of those shifts, the city now has an ultra-Orthodox Jewish mayor for the first time.

According to the Jerusalem Institute for Israel Studies think tank, in 2006 the growth rate of the city's Arab population was 2.7 percent, more than twice that of Jerusalem's Jews. Some of that growth, however, comes from Arab residents returning to the city to avoid being walled out by Israel's separation barrier, which is going up along Jerusalem's municipal boundary.

To boost Jerusalem's lagging economy and attract people to the city, Prime Minister Ehud Olmert on Sunday announced a government investment program of $1.45 billion in the city over five years. The effort is to include moving government offices from Tel Aviv and providing tax breaks to Jerusalem employers.