The head of Quebec's separatist bloc in the Canadian parliament in Ottawa announced his candidacy for the leadership of the Parti Quebecois. 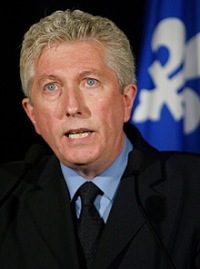 Federal Bloc Quebecois leader Gilles Duceppe has held his post since 1997. He said he decided ton to leave federal politics after consulting with his family and members of the separatist movement.

"I think it's time to end the suspense," he said in a statement.

Boisclair stepped down after the PQ's poor election results in March. Boisclair also recently accused Duceppe of undermining him behind the scenes.

Some PQ members in Ottawa's legislature gave the cold shoulder earlier this week to a potential Duceppe bid, with few party stalwarts publicly supporting him and many others suggesting he should just stay in Ottawa.

Marois, who has made two failed bids for the PQ leadership, found a warmer reception with several party members immediately saying she would make the best leader.

She held several provincial cabinet portfolios in her 30 years in politics, including finance, education and health. She also served as deputy premier of Quebec.

The PQ has been in turmoil since Boisclair rose to power. The party sank in polls before finishing third in this year's election behind the conservative Action Democratique du Quebec and the governing Liberals.

The issue of Quebec sovereignty was not a major issue in the recent election, but it is never far from the surface as support usually hovers around 45 percent. Quebec has held two failed referendums on separation from English-speaking Canada. It failed by a razor-thin margin in the most recent one in 1995.

The idea of holding another referendum is unpopular in Quebec, and Boisclair's personal popularity lagged behind that of Liberal Premier Jean Charest and Action Democratique leader Mario Dumont, whose party seeks to trim government and obtain more autonomy for Quebec within a united Canada.