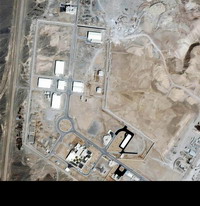 Ali Larijani's comments came a day after the U.S. and France took Iran to task during a conference on nuclear proliferation for defying a U.N. Security Council demand that it freeze enrichment.

"If the West again applies the past wordings about Iran's nuclear case, this issue will not conclude," the Web site quoted Larijani as saying. "They should abandon this idea that they can change conditions of Iran's nuclear case by applying harsh word policy."

The U.S. and some of its allies have accused Iran of secretly developing nuclear weapons and have demanded the country suspend its enrichment activities prior to any negotiations.

Iran has maintained that its program is peaceful and has said it will not stop enrichment despite two sets of U.N. sanctions and the threat of more. The U.N Security Council has set deadline of late May for Iran to suspend enrichment or face additional sanctions.

Diplomats from the five permanent members of the U.N. Security Council and Germany held talks in Berlin on Thursday on ways to get Iran to halt its disputed uranium enrichment program. German officials said the meeting was preparation for another round of talks between European Union foreign policy chief Javier Solana and Larijani.

After meeting late last month, Solana and Larijani spoke of some progress and agreed to meet again within weeks in hopes of finding enough common ground to serve as the basis of renewed talks between Tehran and the six countries.

Diplomats told The Associated Press after those talks that the concept of a "double time out" was touched upon by the two men in their last discussion - with the two sides setting the stage for substantive discussions by Iran freezing its enrichment program in exchange for a commitment of no new U.N. sanctions.

But Larijani on Friday seemed to rule out freezing enrichment as a condition for negotiations, saying instead that the West should drop this demand.

"If the world leaders revise in this regard, then it will be possible to solve the case peacefully," Larijani was quoted as saying. "If the West pursues hardening methods regarding Iran's nuclear issues, it cannot naturally enjoy Iran's capacities in a proper way."

Also on Friday, U.S. Vice President Dick Cheney issued a warning to Iran while aboard an aircraft carrier in the Persian Gulf, saying the United States would join allies to keep Iran from getting nuclear weapons "and dominating the region."