About 1,500 people congregated Friday at the local offices of a South African cell phone company that lost four staff members in a plane crash last week that killed all 114 aboard. 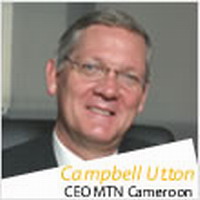 The head of South African cellular phone giant MTN's Cameroon operations, Campbell Utton, was on board, as was its chief financial officer, Sarah Stewart, company secretary Patrick Njamfa and network engineer Patrice Enam. The four were traveling to South Africa for a business meeting, and Stewart was accompanied by her husband, Adam Stewart. Utton was South African, the Stewarts were British and Njamfa and Enam were Cameroonian.

The mourners gathered at the MTN headquarters in Douala for an ecumenical service led by a Muslim imam, a Catholic priest and a Presbyterian preacher.

"This is Cameroon's death. It is not only ours," he said.

He said his brother had become a father three weeks ago. Enam's weeping widow, Agatha, attended the ceremony, clutching the arm of her doctor, still recovering from a Caesarian delivery.