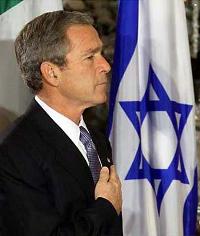 Americans think that both Bush and Democratic-led Congress are doing just the same dreary job, following four months of political standoffs that have seen little progress on Iraq and a host of domestic issues.

An AP-Ipsos poll also found that House Speaker Nancy Pelosi is a more popular figure than the president and her colleagues on Capitol Hill, though she faces a gender gap in which significantly more women than men support her.

The survey found only 35 percent approve of how Congress is handling its job, down 5 percentage points in a month. That gives lawmakers the same bleak approval rating as Bush, who has been mired at about that level since last fall, including his dip to a record low for the AP-Ipsos poll of 32 percent last January.

"It's mostly Iraq" plus a lack of progress in other areas, said Rep. Tom Cole, a Republican from Oklahoma who heads the House Republican campaign committee. "These are not good numbers for an incumbent, and it doesn't matter if you have an R or a D next to your name."

Democrats agree the problem is largely Iraq, which has dominated this year's session of Congress while producing little more than this month's Bush veto of a bill requiring the withdrawal of U.S. troops. It has also overshadowed House-passed bills on stem cell research, student loans and other subjects that the White House opposes, they say.

"People are unhappy, there hasn't been a lot of change in direction, for example in Iraq," said Rep. Chris Van Hollen, chairman of House Democrats' campaign effort.

The telephone survey of 1,000 adults was taken Monday through Wednesday and has a margin of sampling error of plus or minus 3 percentage points.