A fire burned several homes on the edge of this island city as residents and visitors fled the resort 20 miles off the southern California coast. 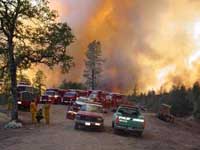 Firefighters battled flames on the city limits of Avalon, where hundreds of people lined up to board ferries back to the mainland. Many covered their faces with towels and bandanas as ashes fell.

Fire Chief Steven Hoefs said a few homes burned, but he did not know how many. The fire scorched more than 4,000 acres, including a commercial building and several storage buildings.

An orange blaze loomed behind the quaint harbor, the landmark 1929 Catalina Casino and homes, restaurants and tiny hotels that cling to slopes rising sharply above the waterfront. The scene belied the idyllic image of the island cultivated in its 1930s and '40s heyday as a playground for movie stars.

In Avalon, authorities urged people to evacuate. Visitors were directed to the historic art deco Casino until it lost electricity, while residents were sent to another part of the harbor.

The island's ferry service added four night departures of 400-passenger vessels from Avalon. "We're going to continue to send ferries over there until we're not needed," said spokeswoman Elaine Vaughn.

The blaze began Thursday five miles east of the island's airport. It was fanned by winds and gusts of up to 20 mph.

About 160 firefighters, aided by four water-dropping helicopters, battled the flames through most of the day. National Guard helicopters flew in more firefighters, and dozens of fire engines arrived at Catalina aboard giant military hovercraft.

Catalina is a long, narrow island covering 76 square miles and is served by ferry boats from Los Angeles, Long Beach and other mainland harbors. Avalon has a population of 3,200 that swells to more than 10,000 on weekends and in summer.

A family of eight said they had just enough time to pack some clothes and personal papers before fleeing to the beach to catch a ferry.

"I'm scared," said Angelica Romero, 30, holding her 7-month-old daughter. "But what's important is I have my children. The rest doesn't matter."

At the mainland port of Long Beach, island resident Kathy Troeger arrived on a ferry with her three children and a friend's daughter. Her husband, a captain in county fire's Baywatch division, stayed behind to help fight the fire.

"It was like a nightmare when we left," she said. "You couldn't breathe and ash was falling like snow."