Iraqi officials seek support for war in US Congress

Worried that American legislators' support for Iraq is deteriorating rapidly, Baghdad dispatched senior officials to Congress this week to warn members one-on-one that pulling out U.S. troops would have disastrous consequences. 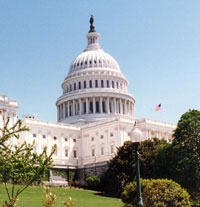 Iraqi officials seek support for war in US Congress

The House voted 221-205 Thursday for a stronger measure that would fund the war only through July, giving Congress the option of cutting off money after that. The bill is unlikely to survive in the Senate, although it indicates the war's unpopularity among members and their frustration with the lack of progress in the Iraqi parliament.

The Iraqis' lobbying push targeted Republicans and Democrats alike, but focused primarily on those considered influential on the war debate. On Thursday, hours before the House voted to limit funds for the war, Iraqi Deputy Prime Minister Barham Saleh met with more than 30 House Republicans and more than a half-dozen senators, including Democratic Sens. Harry Reid and Hillary Rodham Clinton and Republican Sen. John Warner.

Baghdad's ability to sell members like Republicans Coleman and Chambliss on the war effort is critical if the Iraqi government wants U.S. troops to stay. Coleman in recent months has become deeply skeptical of the president's decision to send additional troops to Iraq and says patience on the war in general is limited.

Chambliss and Sen. John Sununu, a Republican who met separately with Saleh, will be up for re-election next year - facing voters who have grown tired of a war in its fifth year and that has killed more than 3,380 troops. While Republicans have been reluctant to intervene, many say President George W. Bush has until September to tell if the troop buildup in Iraq is working before they demand another approach.

With the clock ticking, Saleh - a Kurdish politician highly regarded by U.S. officials and who speaks impeccable English - said he came to Congress Hill to convey the "imperative of success" in Iraq.

"Iraq is a central battleground in this historic conflict" against terrorism, he said in a brief interview after meeting with Reid, the Senate majority leader.

His trip came on the heels of a visit by Mowaffak al-Rubaie, the national security adviser to Iraqi Prime Minister Nouri al-Maliki, along with three other senior advisers, according to the Iraqi embassy. The New York Times first reported al-Rubaie's visit on Tuesday.

The timing of these meetings is no mistake. This month, Congress is expected to send Bush legislation that funds the war in Iraq but requires the Baghdad government meet certain political and security reforms. In question is what consequences the Iraqis should face if they fail. Democrats want U.S. troops to leave, Republicans say they do not want to force redeployments, but some say they would be open to withholding more than $5 billion (EUR 3.7 billion) in foreign aid.

The most recent irritant among U.S. lawmakers was a report that Iraqi officials would break for two months this summer.

Saleh said he expects the vacation to be shortened by at least a month, although nothing had been decided. He added that Iraqis value being independent and do "not take kindly of (U.S. officials) telling us when to recess."

Reid's spokesman Jim Manley said the senator told Saleh that "U.S. patience, blood and treasure were not unlimited and that the Congress would be taking a more decisive role in the coming weeks and months.

"Salih understood the point, and said he would deliver the message to the Iraqi cabinet," Manley added.

Clinton, a Democratic presidential contender for 2008, "finds it useful to hear their descriptions of the current situation in Iraq and to use those opportunities to convey her feelings on the need to make greater political progress in Iraq," said spokesman Philippe Reines.

Coleman, who says he has known Saleh personally for years and considers him to be among the most capable leaders in Iraq, said Saleh knows time is running out and is conveying that message to his colleagues in Baghdad.

"That message has been delivered," he said. "The question is whether it's being acted upon."