A Palestinian woman in the seventh month of her pregnancy lost her unborn baby on Thursday being caught in crossfire between Israeli troops and Palestinian militants. 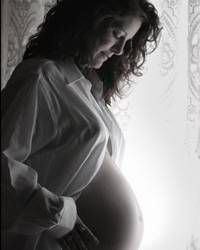 Ahmed Bisharat, a nurse at Rafidia Hospital in Nablus where Maha Katouni was treated, said surgeons discovered the fetus' head had been shattered by bullet fire.

The Israeli army confirmed an exchange of fire in the area in which two Palestinian armed men and one soldier were wounded. It investigated the Palestinian report, but could not confirm other injuries "at this point," the army spokesman's office said.

The wounded woman's husband, Rafat Katouni, said his house was in the line of fire between Israeli troops on a daytime arrest raid and Palestinian gunmen.

He and his 29-year-old wife had decided to move their three children into another room when a bullet entered through a window, hitting her in the back and exiting through her abdomen, he said.

He said the bullet came from the direction of the Israeli troops, though the claim could not be verified. A bullet in the bloodied room where she was hit had lodged inside a mirror's wooden frame.

It took about 30 minutes for an ambulance to arrive because soldiers held it up, her husband said. The army was looking into the claim, but noted that it routinely bars vehicles from entering battle zones and said the Israeli forces immediately left the area after the shootout.