After many triumphs, Blair's departure clouded by Iraq 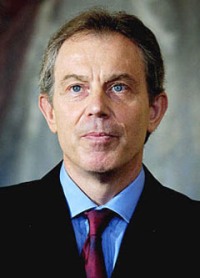 After many triumphs, Blair's departure clouded by Iraq

The Iraqi war became a bitter end for the decade of Tony Blair’s achievements.

The boyish-looking leader nicknamed "Bambi," just 43 when he became prime minister a decade ago, has gone gray, his furrowed brow making him appear worn.

Each crease represents a difficult chapter in the past decade - Princess Diana's death, suicide bombings in London, scandals leading to the arrests of top aides, the unpopular war in Iraq that has cost nearly 150 British lives.

"In government, you carry each hope, each disillusion ... ," Blair said last September, near the beginning of what has been a long, slow march toward his announcement Thursday that he will step down June 27.

The mood today could not be more different from the euphoria that greeted Blair's arrival at 10 Downing St.

Returning his Labour Party to power after 18 years under Conservatives Margaret Thatcher and John Major, he pledged to make Britain prosperous, boost the working class, make the government accountable and restore Britain's standing on the world stage. He seemed a breath of fresh air, a rock 'n' roll fan. No sooner was he elected than he and his wife, Cherie, had a baby.

His first year in power, 1997, had its elegiac moments: Blair presiding over the return of Hong Kong, jewel of the British empire, to China; Blair eulogizing Princess Diana, killed in a Paris car crash.

And there were triumphs: three consecutive election victories, a booming economy, diplomacy that brought peace to Northern Ireland. Britain got a minimum wage. Scotland and Wales got their own elected parliaments, while hereditary elements of membership in the House of Lords, the upper legislative chamber, were sharply curtailed. Gay couples were allowed to wed in civil partnerships.

But those victories were engulfed by later events: the 2005 suicide bombings that killed 52 London commuters; worsening relations with the Muslims who Blair had sought to draw closer to the British fold; a corruption probe, and the accusation that he had become U.S. President George W. Bush's poodle.

What Blair initially lacked in experience, he made up for with youthful exuberance and optimism.

"Mine is the first generation able to contemplate the possibility that we may live our entire lives without going to war or sending our children to war," he said shortly after becoming prime minister.

The Iraq war confounded that hope.

But before Iraq became the all-consuming issue, Blair had much going for him.

Under his leadership and that of Treasury chief Gordon Brown, Britain emerged from a long economic slump. Brown is expected to become the next prime minister after a brief party leadership contest.

The pair made the Bank of England independent, broke Britain out of years of boom-and-bust cycles and kept inflation low for years.

Britain is now the world's fifth-largest economy, with 2007 growth projections of nearly 3 percent. The British pound is at its strongest in more than a decade. Unemployment has been slashed.

"The new government became engaged in a dialogue with Muslims that was not there under the Tories," said Ahmed Versi, editor of Muslim News. That was before Blair joined the Iraq war and the bombs went off on London subways and a bus.

A practicing Protestant, Blair pursued what he called an "ethical foreign policy."

With a natural ally in U.S. President Bill Clinton, he pushed for intervention in East Timor and Sierra Leone. Two years into his premiership he joined NATO's campaign to oust Slobodan Milosevic of Yugoslavia. He championed aid for Africa and the effort to curb global warming.

Northern Ireland was his most successful diplomatic effort.

He broke with previous leaders by offering Sinn Fein, the political voice of the Irish Republican Army, a place in negotiations in exchange for an IRA truce. His efforts would culminate in a historic spectacle Tuesday, when Catholic and Protestant leaders, lifelong adversaries, were sworn in at the head of a new provincial government.

Although Blair's vision for his party was clear, the Sept. 11 terrorist attacks muddied many of his hoped reforms.

The attacks bound Britain to the United States. But many of Britain's 1.6 million Muslims felt an immediate and chilling difference. A raft of anti-terrorism legislation authorized police to hold suspects longer without charge. Dozensof Muslim groups were banned. Police put mosques under surveillance.

Then, a day after Blair rejoiced in London's successful bid for the 2012 Olympics came the transit bombings.

In a video, bomber Shehzad Tanweer accused Britain of declaring war on Islam. His Yorkshire accent and history of service to his community marked him as a homegrown Englishman, and the sudden realization that he was a jihadist shocked the nation and seemed to mock Blair's vision of a multicultural Britain.

Even tougher anti-terrorism measures have followed, and Muslim resentment has grown.

But it is Iraq, and his alliance with the U.S., that dominates his legacy in the twilight of his rule.

"Very early on, he made a philosophical commitment to working with America at all costs," Anthony Seldon, a Blair biographer, told The Associated Press. "Iraq will be the single most defining issue for his legacy, but the two questions are going to be, was it the decision or the implementation that was at fault?"

"He did Iraq because Iraq was right," Seldon said. "He didn't do it because he thought he had to."

Although most legislators initially supported his decision to join the war, two high-profile Cabinet ministers quit, and criticism of Blair grew to a crescendo as the argument for war - weapons of mass destruction - disintegrated.

Blair was not the first British leader to throw in his lot with the United States. So did Winston Churchill, and Thatcher and Major.

The alliance with Bush has at times embarrassed Blair. At a summit in Russia last year, Bush was heard exclaiming, "Yo, Blair!" As Blair awkwardly waited by his ally's side, Bush dismissed his offer to help find a solution to violence engulfing the Middle East. With the tap of his finger, Blair realized the microphones had been left on.

Although he is about to leave office, Blair may be trailed by a criminal inquiry into a cash-for-honors scandal.

He is believed to be the first sitting prime minister to be questioned in a criminal inquiry. He had been called twice as a witness in an investigation into whether honors, such as knighthoods and seats in the House of Lords, were offered in return for loans to political parties.

Three of Blair's close aides have been arrested and are out on bail: his chief fundraiser, his Middle East envoy and a senior aide.

As for Blair's future, at 54, he is six years younger than Bush. The father of four may hit the lecture circuit after he steps down this summer. An advisory role involving Africa or the European Union could be in his future.

And there is talk that he may set up an interfaith forum after he leaves office, much like the foundation Clinton started.

Britain is expected to hold general elections in 2009, at the earliest.