Commander of Marine platoon, who ordered several houses to be cleared in the Iraqi town of Haditha, was shocked to learn women and children died in the attacks, but he defended the assaults as a legitimate combat operation. 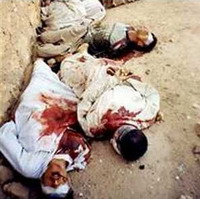 1st. Lt. William Kallop was the first officer at the scene of a roadside bomb blast that killed one Marine and injured two others on Nov. 19, 2005. Arriving minutes after the blast, he ordered several houses be cleared. In all, Marines killed 24 Iraqi civilians.

Kallop, who was granted immunity for his testimony, was the first witness in the biggest U.S. criminal case involving civilian deaths in the Iraq war. He spoke at a preliminary hearing at Camp Pendleton for Capt. Randy W. Stone, a Marine lawyer accused of dereliction of duty for failing to investigate the deaths.

Stone's civilian attorney, Charles Gittins, called Kallop to the stand because he hoped the commander's testimony would show Stone did nothing wrong because, based on his understanding of the deaths, Stone thought the killings were a legitimate outcome of combat.

"I don't think any of the officers knowingly did anything wrong, I think they acted with the information they had," Gittins told the court. He noted that Stone reported the incident up his chain of command but was told not to investigate further.

Stone, 34, and three other officers are charged with dereliction for failing in their duties to investigate or report the killing. Three enlisted Marines are charged with unpremeditated murder in the case. They deny any wrongdoing, saying they responded properly to a perceived threat during a highly chaotic time.

Recalling the aftermath of the killings, Kallop said he went to inspect one of several cleared houses. Instead of finding dead insurgents, he found body parts, an injured boy and a dead Iraqi man.

"The only thing I thought, sir, was what the crap?" Kallop said. "Where are the bad guys, why aren't any insurgents here?"

Gittins asked Kallop if he thought the Marines had done anything wrong. "The Marines had been operating the best they could in an uncertain environment, and that was the bad outcome," Kallop answered.

The killings were part of a brutal day of conflict in Haditha, Kallop testified, with several other attacks taking place across the city.

Tuesday's hearing was part of an Article 32 investigation, the military's equivalent to a grand jury proceeding. Maj. Thomas McCann, the investigating officer, will hear evidence and recommend whether the charges should go to trial.

Gittins said he expects to call 25 witnesses, including a two-star general, over the next few days.

The slayings occurred after a roadside bomb destroyed a Humvee in a Marine convoy. Marines shot five Iraqi men were shot as they approached the scene in a car and others - including women and children - died as troops went house to house in the area, clearing homes with grenades and gunfire.

Initially, the Marines were praised for their actions. Months later, Time magazine published a story that questioned the official version, prompting an investigation.

A report by Army Maj. Gen. Eldon A. Bargewell said Marine officers did not deliberately cover up the incident, but it faulted the Marine chain of command for viewing civilian casualties, "even in significant numbers, as routine."

The squad leader, Staff Sgt. Frank Wuterich, is charged with the unpremeditated murder of 18 of the Iraqis.

Prosecutors have given several other Marines immunity in return for their testimony. One, Sgt. Sanick P. Dela Cruz, initially was charged with the unpremeditated murder of five civilians.