Pope Benedict XVI is heading to the world's most populous Roman Catholic country at time when evangelical Christians are packing converted storefronts and cavernous churches every Sunday, thrusting their Bibles in the air. 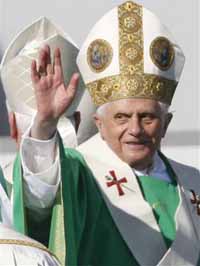 Benedict will try to halt that wave of Protestant fervor during his first trip to Brazil. Aiming to energize its more than 120 million Catholics, Benedict will canonize the country's first native saint, hold Masses that could attract millions and open a conference of Latin American bishops in the holy shrine of Aparecida.

Few believe the five-day papal visit, which begins Wednesday, will reverse the flight of Catholics who have abandoned the church to become Protestants - or who simply stopped attending Mass amid profound societal change.

Nearly half the world's 1 billion Catholics live in Latin America, but Pentecostal churches are enjoying explosive growth, promising divine intervention to lift parishioners from lives of misery in a region where the divide between rich and poor is among the worst on the planet.

Brazil's census shows the percentage of citizens characterizing themselves as Catholics plunged from 89 percent in 1980 to 74 percent in 2000, while those calling themselves evangelical Protestants rose from 7 percent to 15 percent.

A study released last week by Brazil's respected Getulio Vargas Foundation indicated the Catholic decline stabilized from 2000 to 2003, but also showed the percentage of Protestants continued to rise.

Sao Paulo's former Catholic archbishop, Claudio Hummes, told reporters the losses are "a hemorrhage, and it's not over."

"It is due to the expansionism of Protestant sects that attract an ever-larger number of baptized Catholics, but also to moral relativism, imported from Europe and introduced on the continent above all by the local ruling classes, the mass media and the intellectuals," said Hummes, now prefect of the Vatican's Congregation for the Clergy.

The Vatican's Latin American leaders also struggle with a host of secular issues, including Brazil's free distribution of condoms to combat AIDS, a rise in second marriages not recognized by the church and Mexico City's move to legalize abortion.

"The Catholic Church faces not only competition but losses in Latin America," said Fernando Segovia, professor of theology at Vanderbilt University's Divinity School. "This has to be foremost in Benedict's mind, combined with a severe shortage of clergy. You put those two things together and you have a rather difficult situation for Rome to handle."

Many wonder whether Benedict will be able to make a difference, especially since the church's situation worsened in Latin America despite frequent visits by his beloved predecessor, John Paul II.

"He was the pilgrim pope, who went to Latin America as a conquering hero, but for all John Paul's popularity, things grew worse over his tenure," said former Vatican radio reporter David Gibson. The new pope "is 80 years old, and he's not John Paul in his early days. Benedict is an older man, a theologian, a man of words rather than presence and action."

Some also see the German-born Benedict as out of touch with the developing world, an image Vatican spokesman Federico Lombardi has tried to counter by emphasizing the pope's concern for problems ranging from poverty and debt to the fight against arms trafficking. "It's not true that he's 'Eurocentric' as some claim," Lombardi said.

But many Brazilians still follow the liberation theology movement Benedict moved to crush when he was Cardinal Joseph Ratzinger, and they remember well that he labeled their work a Marxist heresy.

While the church's hierarchy in Rome has pressured Catholic priests around the world to stay out of politics, these Brazilians have remained defiant: more than 60,000 ecclesiastic base communities have been instrumental in educating poor people, union organizers and most of the leaders of the Landless Rural Workers' Movement, Brazil's most radical squatter group.

In the lawless Amazon rainforest, Catholic priests, nuns and lay people work tirelessly to organize poor settlers to stand up for their rights. The most prominent was Dorothy Stang, an American nun killed in 2005 while trying to settle poor farmers on an area ranchers wanted for development.

Brazil's bishops have tried recently to promote a middle ground - lobbying the government for better working conditions for sugarcane cutters and to eliminate the virtual slavery of workers in the Amazon. But many Brazilian Catholics remain bitter over the Vatican's treatment of the movement's leaders.

The conservative Protestant churches don't engage in social activism, but religious experts say they do better than the traditional Catholic church at meeting the basic needs of poor Brazilians.

The Protestant congregations "tend to generate a very strong sense of community with a much higher percentage of Pentecostals who participate in small activities like Bible study, outreach, providing financial help, finding jobs," said Luis Lugo, director of the Pew Forum on Religion & Public Life.

At a Sunday service in the massive God and Love Pentecostal Church that looms over several elevated Sao Paulo highways, thousands of blue-collar workers and their children waved their hands, shouting "Hallelujah!" and spontaneously speaking in tongues as pastors promised Jesus would solve their earthly problems and guarantee them passage to heaven.

Less than a mile away, several hundred mostly middle-aged and elderly Catholics sat in the Our Lady of Consolation church amid ornate stained glass windows and pews hewn decades ago from Brazilian hardwood.

They dutifully rose to recite the rosary and sing hymns, then sat in silence as a priest urged them to seek salvation by being obedient sheep in God's flock.