Secretary of State Condoleezza Rice will try to smooth ruffled feathers in Russia next week ahead of a planned meeting between President George W. Bush and Russian President Vladimir Putin. 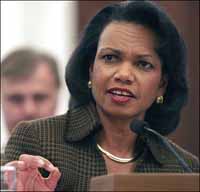 Rice hopes to take the edge off Russian anger over U.S. plans for a missile defense in Europe while seeking Russia's continued cooperation with a U.N. Security Council campaign to pressure Iran over its nuclear program.

The State Department announced Rice's trip Monday. She is to be in Moscow on May 14-15.

Spokesman Sean McCormack added that Rice probably would not add stops in Israel and the West Bank, as she had been expected to do, because of political turmoil in Israel.

"There's, obviously, a lot of politics in Israel that they are working through at this point, but we are going to continue our efforts to advance the Israeli-Palestinian track," McCormack told reporters. "I would say it's a change in plans, yes."

The Bush administration has been trying to lower the temperature with an increasingly restive Russia, in large part because it needs Russian cooperation in international negotiations or confrontations with Iran, North Korea and on the Israeli-Palestinian issue.

As Putin enters what could be the last year of his presidency, he has become more defiant of international pressure and more willing to challenge the United States and Europe.

Russia's affluence and stability, fueled by high oil prices, have given him the confidence to confront the West and to try to reassert his nation's influence as a world power. But Western critics warn that the Kremlin's new assertiveness reflects renewed imperial ambitions and threatens its neighbors.

Bush said last week he is stepping up a dialogue with Russia over the planned U.S. missile defense system in hopes of convincing Moscow that the United States is "a friendly force."

The Bush administration plans to install a radar system in the Czech Republic and interceptors in Poland as part of its broader missile defense system. As a result, Putin has threatened to pull out of a major post-Cold War treaty that sets limits on the deployment of military forces in Europe.

"Our intention of course is to have a defense system that prevents rogue regimes from holding Western Europe and-or America hostage," Bush said. "Evidently, the Russians see it differently."

Bush said he personally asked Putin to give Defense Secretary Robert Gates an audience on a recent trip to Moscow so that Gates could discuss the plan more fully.

"We have started a dialogue, as a result of Secretary Gates' visit, that hopefully will make explicit our intentions, and hopefully will present an opportunity to share with the Russians so that they don't see us as an antagonist force, but see us as a friendly force," Bush said.

Rice had been expected to return to Jerusalem next week for what has been a monthly checkup on her efforts to steer Israel and the Palestinians back toward peace talks. With the highly unpopular Israeli Prime Minister Ehud Olmert in political limbo, however, Rice decided to delay meetings centered on a new U.S. list of "benchmarks" for both sides.