An energy drink called Cocaine was removed from stores nationwide amid concerns about its name. 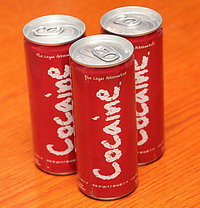 Clegg Ivey, a partner in Redux Beverages LLC of Las Vegas, said the company plans to sell the drink under a new name for now.

The Food and Drug Administration issued a warning letter last month that said Redux was illegally marketing the drink as a street drug alternative and a dietary supplement. May 4 was the deadline for the company to respond.

The FDA cited as evidence the drink's labeling and Web site, which included the statements "Speed in a Can," "Liquid Cocaine" and "Cocaine - Instant Rush." The company says Cocaine contains no drugs and is marketed as an energy drink. It has been sold since last August in at least a dozen states.

"Of course, we intended for Cocaine energy drink to be a legal alternative the same way that celibacy is an alternative to premarital sex," Ivey said. "It's not the same thing and no one thinks it is. Our product doesn't have any cocaine in it. No one thinks that it does. We think it is most likely legal in the United States to ship our product."

Ivey said the FDA did not order the company to stop marketing the drink, but officials were concerned about possible legal action. They will announce a new name within a week and hope to have the product back on store shelves within a few weeks.

"What we would like to do is continue to fight to keep the name because it's clearly the name that's the problem," Ivey said. "What we can't do is distribute our product when regulators in the states and the FDA are saying that if you do this, you could go to jail."

Attorneys general in Connecticut and Illinois recently announced that Redux had agreed to stop marketing Cocaine in those states, while a judge in Texas has halted distribution there.

"Our goal is to literally flush Cocaine down the drain across the nation," said Connecticut Attorney General Richard Blumenthal, who announced the company's agreement with his state Monday. "Our main complaint about Cocaine is its name and marketing strategy seeking to glorify illegal drug use and exploit the allure of marketing 'Speed in a Can,' as it called the product."

The Connecticut Department of Consumer Protection pulled 300 cases of Cocaine from state stores on April 23, saying Redux Beverages did not license the product as required by law.

As part of the agreement, Connecticut distributors and retailers can return unused product to Redux for a full refund.

An FDA spokeswoman said she could not comment because the matter is still pending.

Fans responded to the announcement that Redux would stop marketing Cocaine by leaving dozens of messages, many of them profanity-laced, on a page created for the product on the social networking site MySpace.com.

The energy drink is the first product marketed by Redux, which wants to keep the name Cocaine because it fits with the company's tongue-in-cheek approach, Ivey said.