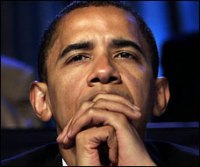 "For years, while foreign competitors were investing in more fuel-efficient technology for their vehicles, American automakers were spending their time investing in bigger, faster cars," according to a text of the Illinois senator's remarks that were provided to The Associated Press.

Obama was to deliver an afternoon speech before Detroit business and political leaders on how he would work to revive the struggling U.S. auto industry and change America's energy policies.

Obama wants to encourage domestic automakers to make fuel-efficient hybrid vehicles by giving them health care assistance for retirees. His plan also would require automakers to invest half of their health care savings into technology to produce those vehicles.

"Here in Detroit, three giants of American industry are hemorrhaging jobs and profits as foreign competitors answer the rising global demand for fuel-efficient cars," he said in the text of his speech.

"The need to drastically change our energy policy is no longer a debatable proposition. It is not a question of whether, but how; not a question of if, but when. For the sake of our security, our economy, our jobs and our planet, the age of oil must end in our time."