University of Wisconsin to honor 13 US would-be women astronauts

More than 40 years ago, 13 young American women came close to venturing into space, but their dreams were dashed just days before they were to have started spaceflight simulation tests. 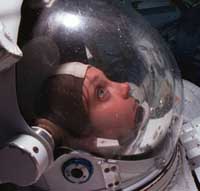 University of Wisconsin to honor 13 US would-be women astronauts

Now, officials of the University of Wisconsin, at Oshkosh, hope they can soothe the women's burning what-ifs by awarding each an honorary doctorate at graduation ceremonies on Saturday.

"Isn't that neat?" said Jerri Truhill, one of the thwarted pioneers. "We're not used to that. We're just used to rejection."

The 13, who trained in secret in the early 1960s, were told NASA was not interested in their training, just days before the group was to leave for spaceflight simulation tests in Pensacola, Florida.

Simply by being pilots, the women bucked a culture that expected women to cook, change diapers and look pretty. The 13 pushed it further, enduring - and passing - the same tests as the better-known "Mercury 7" men, suffering through sensory deprivation and tests gauging how long they could keep body parts submerged in near-freezing water.

The 13 female pilots were initially part of the United States' effort to catch up to the Soviet space program, which launched the first man, Yuri Gagarin, into space in April 1961. But NASA pulled the plug in the 11th hour.

"I wanted it so bad I could taste it, practically," said Beatrice "B" Steadman, 80, one of the 13. "I think we all wanted to punch somebody."

In 1963, Soviet cosmonaut Valentina Tereshkova became the first woman in space. The first American woman to enter space, Sally Ride, did not launch until 1983.

Nicole Cloutier, a NASA spokeswoman in Houston, said she could find no one to comment because no one from that era still works at NASA. She did offer that NASA now has 25 female astronauts.

George Low, director of space missions in the 1960s, explained at the time that the women lacked military test pilot experience (they could not be test pilots back then); that letting women use the training equipment would cut down on the men's time; and that more than enough men were waiting for astronaut slots.

Author Martha Ackmann writes in her book "The Mercury 13: The True Story of Thirteen Women and the Dream of Space Flight" that NASA decided sending a woman into space was not a priority.

Truhill said she and her friends believe American traditions of women as teachers and stay-at-home mothers caught up to them. The male astronauts referred to the women as "98 pounds of recreational equipment," she said.

She still remembers going to her father at age 4 after her first plane ride and telling him she wanted to fly. He replied that if she worked hard, she could be a stewardess.

"You don't understand the male attitude back then. ... We were stepping on some giant egos," she said.

Enter the University of Wisconsin, 44 years later. In fall 2005, communications instructor Jane Wypiszynski assigned Ackmann's book to her freshmen students. It went over like a fireball.

"They couldn't believe there was a time when women didn't go up in space," Wypiszynski said. "They were appalled."

"Those women were severely wronged," said freshman Matt Miles, 19, who read the book.

Inspired by the women and students' reaction, Wypiszynski went to Chancellor Rick Wells and suggested the university honor all 13 with honorary doctorates.

"They were the pioneers. They're wonderful role models for women to look at," said Susannah Sandrin, director of the university's Women and Science Program, which focuses on recruiting women into science programs and making the courses more gender friendly. "They helped kind of break stereotypes of what women can do."

Rhea Woltman, another member of the 13, worked as a charter pilot and an Alaskan bush pilot. She describes her age as "I won't see 75 again," and said she feels that she does not deserve a doctorate.

"I'd rather be flying the spaceship, but that didn't happen. This is next best. I'll take it," she said.

Truhill, now retired from flying and living in Richardson, Texas, still loves to look at the stars and wonder.

"It just fills you with, I don't know what, to want to go see what's out there," she said. "I tell all the girls it's your turn to take it and run with it because you've got every advantage in the world."