Kenya Airways jetliner's wreckage was found Sunday in a dense mangrove forest on the outskirts of Cameroon's commercial capital. There was no information on survivors. 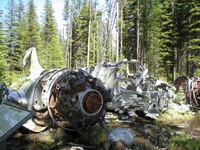 Searchers located the plane in an area about 10 kilometers (6 miles) outside Douala, said Thomas Sobakam, chief of meteorology for the Douala airport.

"We are actively looking for survivors," he said.

The Nairobi, Kenya-bound Boeing 737-800 had departed from Douala early Saturday during a thunderstorm, carrying 105 passengers and nine crew members from 27 countries, authorities said. The plane lost contact with the radio tower between 11 and 13 minutes after takeoff, officials said.

The search initially focused on the thickly forested mountains near the town of Lolodorf, about 140 kilometers (90 miles) southeast of coastal Douala. Sobakam said officials had been led to believe the plane had crashed in the vast and hard-to-access forest because of an incorrect satellite signal, possibly emitted from the plane.

The search-and-rescue effort in the fog-shrouded forest was hampered by heavy rains. At the same time, aviation authorities sent out a ground crew to investigate claims by fishermen living in the swampy mangroves near the Douala airport. Several reported hearing a loud sound at the time of the suspected crash.

"It was the fishermen ... who led us to the site," said Sobakam. "It's close enough that we could have seen it from the airport - but apparently there was no smoke or fire."