The work of the sculptor of the Parthenon in Athens, a bronze horse, went on display Friday at a Rome museum after a decades-long restoration. 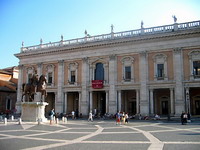 The horse was returned to the Capitoline Museums following a half a million euro (US$680,000) restoration that began in the late '70s, said museum director Anna Mura Sommella.

Leaning on its hind legs with its head held back, as if preparing to break into a wild dash, the horse is one of the few surviving bronze equestrian statues from Greek times, and could be the most ancient, Mura Sommella said.

The dating of the horse has been controversial since its discovery in 1849 in an alley of Rome's Trastevere neighborhood, she said.

Some experts date it to the fifth century B.C. and attribute it Phidias, who carved the Parthenon's frieze and the statue of the goddess Athena, or to his teacher Hegias. Others believe the horse was made by the fourth century B.C. artist Lysippos and might have once carried a statue of Alexander the Great.

"The older dating is the one most credited by eminent researchers," Mura Sommella said in a telephone interview. "In any case, the quality is undoubtedly extraordinary."

The life-size bronze was used as a monument in antiquity. It did carry a figure on its back, which is partially missing, but only a foot of the ancient rider has been found, she said.

During the restoration, experts reattached a piece of the horse's tail and substituted large parts of the legs, which were damaged beyond repair. They also conducted tests on the statue that could help date it with more certainty and conduct further studies.

Mura Sommella said that among the puzzles still facing archaeologists is when and how the horse reached ancient Rome.