Clashes between rival Shiite militia groups occured in Baghdad's Sadr City neighborhood on Friday, when one militia launched an attack on the other's headquarters. 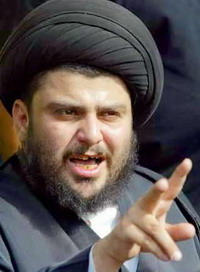 The violence between the Mahdi Army loyal to radical Shiite cleric Muqtada al-Sadr and the Badr Brigades of the Supreme Council for the Islamic Revolution in Iraq began earlier Friday when Iraqi police loyal to the Badr Brigades prevented a Sadr aide from entering the southern Shiite holy city of Najaf.

Mahdi army fighters then attacked the empty building with rockets and gunfire, setting part of it on fire, police said.