Roman Catholic bishops issued a letter blaming president Robert Mugabe for his country's political and economic turmoil. He considered it as "a dangerous path," and arrested a priest for passing the pastoral message on to his congregation. 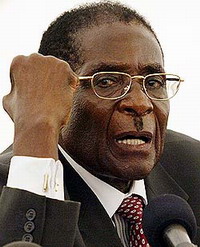 Mugabe, in extracts of an interview published in the state Herald newspaper on Friday, declared the pastoral letter "political nonsense" and said the government would treat the country's nine bishops, all signatories to the letter, as what he called "political entities" and "deal with them accordingly."

Church officials said since the pastoral letter was distributed across the country to coincide with Easter services, state agents visited Catholic churches and questioned worshippers over their understanding of the bishops' message.

The five-page pastoral letter called on Mugabe to end oppression in the country and allow for democratic reform. It also said violent confrontation and deepening economic hardships was pushing the nation close to a flash point.

The arrested priest and a member of his congregation were released without charge after spending 24 hours in jail last month, said Father Oskar Wermter of the Catholic social communications secretariat in Harare.

It was the first reported arrest of a priest on political grounds in recent years. The priest had evidently given prominence to the letter in services in northern Harare.

Wermter said Mugabe's response to the pastoral letter, as reported in the Herald, was to be expected.

"What is surprising is that he kept silent for so long. People have reacted to the letter very positively and maybe that is riling him," Wermter said.

Opposition activists and civic leaders along with independent journalists accused of giving credence to calls for "regime change" in Zimbabwe have frequently been arrested and assaulted in efforts to silence them.

Police violently broke up a multi-denominational prayer meeting March 11, describing it as a banned political demonstration. One pro-democracy activist was shot dead, another died later of wounds suffered in the police action and Morgan Tsvangirai, leader of the main opposition Movement for Democratic Change, and a dozen senior colleagues were hospitalized after beatings.

With their pastoral letter, "the bishops have decided to turn political. And once they turn political, we regard them as no longer being spiritual," Mugabe told the British-based New African magazine, the Herald, a government mouthpiece reported.

"Our relations with them would be conducted as political entities, and this is quite a dangerous path they have chosen for themselves," Mugabe was quoted as saying.

"If I had gone to a church and a priest had read that so-called pastoral letter I would have stood up and said, `Nonsense,"' Mugabe said.

Mugabe, 83, was educated by Catholic missionaries and has Catholic services conducted at his official residence.