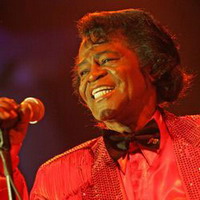 Relative and friends of soul singer James Brown gathered on what would be his 74 birthday to remember him and discuss the direction of the music industry.

"How did we get from 'Say it loud, I'm black and I'm proud,' to where we are today?" said his daughter Deanna Brown Thomas, referring to her father's famous lyrics.

Earlier Thursday, the Rev. Al Sharpton led a rally, calling on the music industry to own up to what he called racist and sexist language. Protesters marched through Manhattan to the headquarters of major music labels like Sony, Warner, Universal and Time Warner.

At the march, Sharpton called on music labels to stop using two derogatory words for women, as well as a racial epithet used to describe blacks.

The assault on the music industry came less than a month after radio host Don Imus was fired for making racist and sexist comments. But Sharpton said the activists were "not asking for censorship."

"We got to start taking care of our own people, we have to be accountable to our own people," said Daryl Brown, lead guitarist of the 17-piece band the Soul Generals, which backed his father for two decades.

Surrounded by photographs of the soul singer, Sharpton said that less than a week before Brown's death, he said he was dissatisfied with the state of popular music.

"We talked about how he wanted to see the music cleaned up," said Sharpton, who said the singer had been more of a parent to him than his own father.

Those gathered watched a video of Brown's final performance at the Apollo in 2004, during a birthday celebration for Sharpton. In the video, the singer urged the crowd to focus on education and brotherhood - and to believe in those less fortunate than themselves.

"You take the negative and make a positive," he said.

Thousands of fans gathered at the Harlem theater in December to pay their respects to the singer, whose 24-karat gold coffin was delivered to the theater in a white, horse-drawn carriage.

Brown, 73, died of heart failure in Atlanta while hospitalized for treatment of pneumonia. He was known for his high-energy performances, husky grunts and shimmying dance moves.

His hits, such as "I Got You (I Feel Good)" and "Papa's Got a Brand New Bag" inspired generations of soul, funk, disco, rock and rap artists.

On Thursday, the singer's children described his birthday as bittersweet.

"I used to call him every night ... so it's really hard," Venisha Brown said through tears. "You see him as the Godfather of Soul, hardest working man in show business. But I just see him as my dad."