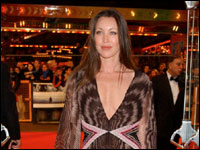 A wealthy former husband of the co-founder of Jimmy Choo Shoes was described as a childish and forgetful man who couldn’t deal with money by her in court on Thursday.

Tamara Mellon, 38, testified in the trial of U.S. banking and oil heir Matthew Mellon, 43, who allegedly hired a private detective to snoop into her finances.

Mellon has pleaded not guilty to conspiring to cause unauthorized modification of computer material between July 1, 2004 and Feb. 4 2005. He allegedly hired a detective agency, Active Investigation Services, to hack into her accounts after they separated.

"Being married to Matthew was like having another child. He can't manage his bank accounts. He can't pay his bills. When we were married I had to take responsibility for managing bank accounts and paying the bills because he was totally incapable," Mellon, whose father was a stunt double for Rock Hudson, told a London court."¤

Asked whether he would have understood the keystrokes of a computer virus, she said: "Matthew cannot even read a comic let alone a legal document. There is absolutely no way he could do it."

Matthew Mellon is standing trial with former policeman Scott Gelsthorpe, 32, from Kettering, Northamptonshire, one of the principals in the detective agency.

Also on trial are agency employee David Carroll, 58, his son Daniel Carroll and Maurice Kennedy, 58, who like Mellon is accused of using the agency to break the law.

Prosecutors said Tamara Mellon received e-mails offering information to assist her in her divorce proceedings. "I can help you put this guy in the trash if you want," one e-mail said.

She passed them to her IT specialist, who detected a Trojan virus which would have invaded her computer if she had opened attachments to the e-mails.

Tamara Mellon testified that her ex-husband's absent-mindedness was so bad that she had been reluctant to leave him alone with their 4-year-old daughter, Minty.

He frequently misunderstood was said to him and missed airplane flights "like other people miss buses," she said.

Nonetheless, she described him as a "fantastic father" and a "happy, playful, excitable and very sweet" man who was still her best friend.

She enlisted Jimmy Choo, a cobbler in east London, to design a range of high-fashion shoes, launching the brand in 1996.

TowerBrook Capital Partners acquired the company in February, in a deal which valued the company at 185 million pounds (EUR271 million, US$370 million). Tamara Mellon remained with the company, dealing with overall creative direction.

She told the court she met Mellon 10 years ago at a meeting of Narcotics Anonymous, when both were recovering from addiction.

They married in 1999 at Blenheim Palace, one of England's grandest homes, with Elizabeth Hurley and actor Hugh Grant among the guests.

She initiated divorce proceedings in 2003.