Opposition: no political Islam to be in Turkey 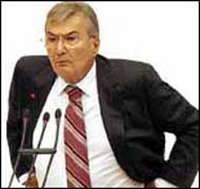 Opposition: no political Islam to be in Turkey

A longtime opposition leader of Turkey have been trying to defeat Islam's encroach into Turkish politics for more than a decade.

Deniz Baykal, 68, is president of Turkey's oldest political party, the Republican People's Party. It was founded by Mustafa Kemal Ataturk, who as Turkey's first president made secularism one of this Muslim nation's most sacred principles.

Since 2002, when Prime Minister Recep Tayyip Erdogan's Islamic-rooted Justice and Development Party swept into power with two-thirds of the seats in Parliament, Baykal has been relegated to the mostly powerless role of leader of the opposition.

It is a role he has used primarily as a platform for tireless harangues against Erdogan's government, which he and many other secular Turks accuse of harboring a hidden agenda to drag Turkey toward Islamic rule.

But last week, Baykal set in motion a dramatic and complicated series of events that eventually prompted Erdogan to call for early elections - which could lead to a dramatic reshuffling of the Turkish government.

It started when Erdogan proposed a close ally and pious Muslim from his party, Foreign Minister Abdullah Gul, for president. Gul looked certain to take advantage of Erdogan's strong majority in Parliament and coast to victory.

Instead, Baykal organized a boycott of the vote and took the issue to the strongly pro-secular Constitutional Court, which made a controversial ruling that a necessary quorum in Parliament was lacking and annulled the first round of voting.

The military also made an ominous statement saying it was willing to intervene in the now-chaotic process and Erdogan, under increasing pressure from hundreds of thousands of pro-secular protesters in the streets, applied to Parliament for early general elections as a way to end the uncertainty.

Baykal, a large, clean-shaven man with neatly combed silver hair and glasses, first entered Parliament in 1973 and has served in various administrations as minister of energy, minister of finance and foreign minister, but never prime minister.

In 1996, he helped organize the opposition against then-Prime Minister Necmettin Erbakan, considered the father of Turkey's modern Islamist political movement and one of Erdogan's most important mentors.

"Turkey is geared towards the modern world, not Saudi Arabia or Iran," Baykal said at the time, in the kind of remark that has become a mainstay of his political career.

The following year, in 1997, the military sent tanks into the streets as a message to Erbakan that no concessions on secularism would be permitted, and the prime minister stepped down.

Baykal graduated with a degree from Ankara University's law school before doing a doctorate in political science. In the 1960s, he also studied on a fellowship at Berkeley and Columbia universities in the United States.