51 villagers die during a U.S.-led operation against Taliban militants in western Afghanistan

President Hamid Karzai said:"Afghanistan can no longer accept or understand civilian deaths," after officials reported that 51 villagers died during a U.S.-led operation against Taliban militants in western Afghanistan. 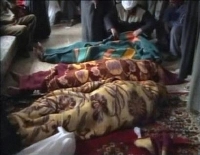 51 villagers die during a U.S.-led operation against Taliban militants in western Afghanistan

Despite claims that women and children were among the dead, the U.S. military maintained it had no reports of civilian casualties. Amid mounting public anger, students staged an anti-American protest in an eastern city.

The coalition said the military operation, including airstrikes, was conducted between Friday and Sunday by U.S. and Afghan forces in Herat province's Zerkoh Valley and killed 136 suspected Taliban the deadliest fighting in Afghanistan since January.

The bloodshed sparked angry anti-U.S. protests this week by villagers, and Mohammad Homayoun Azizi, chief of Herat's provincial council, said two council members who visited the area reported to him that 51 civilians were killed.

The officials were part of a high-level delegation including lawmakers, police and intelligence officials who investigated the incident.

Azizi said the bodies were buried in three different locations and included women and children. The dead included 12 relatives of a man named Jamal Mirzai, he said.

A local resident named Mohammed being treated in a hospital Wednesday said he was wounded in the aerial bombardment.

"There were no Taliban. Ten of my relatives have been killed, including two of my cousins," said the man, who gave only his first name.

Osman Kalali, a lawmaker from Herat who was part of the delegation investigating the incident, said they did not see any Taliban or militants. "The casualties were women, children, this kind of people," he said.

Civilian deaths have deepened Afghans' distrust of international forces and of the U.S.-backed government as they try to combat a resurgent Taliban militia itself accused of indiscriminate attacks that often claim civilian lives.

The coalition said its units were still operating in Zerkoh Valley.

Officials in Italy, which has troops with NATO in Herat, have criticized recent operations there, amid concerns that civilian deaths could make Italian soldiers a target.

Karzai met with NATO, U.S., and European Union officials telling them "civilian deaths and arbitrary decisions to search people's houses have reached an unacceptable level, and Afghans cannot put up with it any longer," according to a statement from his office.

"The intention is very good in these operations to fight terrorism. Sometimes mistakes have been made as well, but five years on, it is very difficult for us to continue to accept civilian casualties," Karzai told reporters earlier in Kabul.

"We can no longer accept civilian casualties the way they occur," he said. "It is not understandable anymore."

Herat regional police commander Akram, who goes by one name, also said the delegation had reported 51 civilians had died, including 18 children and women and eight people listed as missing.

U.N. officials were in the region for their own investigation into the "possible displacement of people and possible indiscriminate use of force," said Adrian Edwards, a spokesman for the U.N. Assistance Mission in Afghanistan. He provided no details on their findings.

The coalition says its troops and Afghan forces destroyed seven Taliban positions in the valley and killed 87 fighters during a 14-hour engagement, including an airstrike, on Monday. Another 49 Taliban were killed two days earlier by a combination of gunfire and an airstrike, it said. One U.S. soldier was also killed.

Also Wednesday, students burned a U.S. flag during the latest in a series of demonstrations in the eastern city of Jalalabad over the killings of five people, including a woman and teenage girl, during a coalition-led raid over the weekend.

According to an AP tally, 151 civilians have been killed in violence in the first four months of this year, including at least 51 killed by NATO and the U.S.-led coalition. These figures do not include the most recent claims in Herat.

The last mass civilian deaths reported were in October, when between 30 and 80 civilians were killed during NATO airstrikes in Panjwayi, a volatile district in southern Afghanistan, according to the government and villagers. NATO said a preliminary inquiry found 12 civilian deaths.

A recent Human Rights Watch report said NATO and U.S. operations, including the use of airstrikes and heavy weapons, killed at least 230 civilians last year. However, most of the 900 civilian fatalities during 2006 were from militant action, it said.