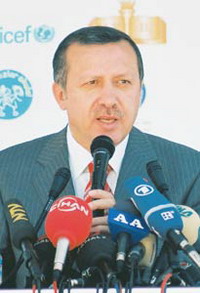 Islamic-rooted ruling party of Turkey called for early general elections amid disputes over its presidency candidate. This step could either cement its majority in Parliament or boost secularists who suspect the government is plotting to foist Muslim values on the nation.

Prime Minister Recep Tayyip Erdogan has found himself besieged ever since his party backed Foreign Minister Abdullah Gul to be the nation's next president, bringing to a head long-running tensions between the government and a secular establishment backed by the military.

With Gul's candidacy in disarray, Erdogan chose the option of early elections on June 24 as a way to defuse tension in a country that has endured coups, economic chaos and weak coalition governments over the decades.

The idea is that Turkey would benefit from a government with a fresh mandate that would also lend legitimacy to the presidential election process.

Fierce secularist opposition to the choice of Gul, one of Ergogan's closest allies, has resulted in political gridlock: The opposition last week boycotted a parliamentary vote on Gul's candidacy and was backed by the Constitutional Court which invalidated the ballot because a quorum was not present.

The crisis has also played out on the street, with secularists staging huge demonstrations. The stock market has tumbled and, most ominously, the military has threatened to intervene as a way to curb the growing influence of Islam.

Erdogan appealed for unity even as he called for new elections.

"To interpret Turkey as if it is divided into two camps is murder," he said. "Even if our views and life styles are different, we are one nation and one Turkey."

"The way to elect the president in Parliament has been blocked," Erdogan told ruling party lawmakers. "It has made it almost impossible for the Parliament to elect a president in the future. This is a bullet fired at democracy."

With new elections, Erdogan could win another strong majority that would allow him to implement more economic reforms and initiatives geared to Turkey's bid to join the European Union. But he also risks seeing secularist parties band together to win more legislative seats - leading to a coalition government and potentially paralyzing factional squabbling.

Erdogan said Parliament would hold a new presidential vote on Thursday, but would abandon the process if a quorum is not reached again. Gul, whose wife covers her hair with an Islamic-style head scarf that secularists view as an alarming symbol of the primacy of religion over state, has said he will not withdraw his candidacy.

At the heart of the conflict was a fear that the ruling party would use its control of both Parliament and the presidency to overcome opposition to moving Turkey toward Islamic rule. Fears have been fanned by the actions of Erdogan's party in the past.

It has tried to ban adultery and banned the sale of alcohol in cafes run by its municipalities, while also encouraging the opening of religious schools and has spoken of lifting the ban on Islamic head scarves in public offices and schools.

More than 700,000 pro-secular Turks demonstrated in Istanbul on Sunday, many of them women who believe political Islam would deprive them of personal freedoms and economic opportunities.

Secularists are deeply skeptical of the government despite its stated commitment to secularism, as well as reforms aimed at gaining membership to the European Union, because many ruling party members made their careers in Turkey's Islamist political movement. Erdogan once spent several months in jail after reciting an Islamic poem that prosecutors said had incited religious hatred.

The ruling party has advocated an eventual move toward a U.S.-style presidential system with a more powerful executive, adding to concerns about a president with an Islamist tilt.

Erdogan also said he would push for a referendum if necessary on a constitutional amendment allowing the president to be elected by popular vote.

"If we cannot get the Parliament to choose a president, we will take this subject to the people and we will find a way to open presidential elections to our people," he said.

Pro-secular groups say the ruling party, which came to power in 2002 with 34 percent of the vote, did not have a strong popular mandate even though an electoral quirk gave it 66 percent of the seats in Parliament.

In 1997, the military pushed pro-Islamic Prime Minister Necmettin Erbakan out of power, sending tanks into the streets in a message that any concessions on secularism would not be permitted.

The founder of modern, secular Turkey, Mustafa Kemal Ataturk, gave the vote to women, restricted Islamic dress and replaced the Arabic script with the Roman alphabet. But Islam remains a powerful and attractive alternative for many Turks in this predominantly Muslim nation of more than 70 million.