President Moshe Katsav's lawyers made a last-ditch effort on Wednesday to stave off an indictment on rape and other sexual assault charges at a hearing before Israel's top prosecutor. 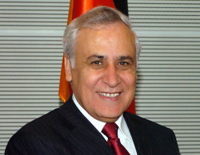 Attorney General Meni Mazuz notified Katsav in January that he intends to press charges of rape, sexual assault and fraud following allegations against the president by four women who used to work for him.

Following standard practice in charges involving senior officials, Katsav will have a last chance to plead his case before Mazuz before an indictment is filed. The various crimes of rape, sexual assault, fraud and obstruction of justice could carry a total of 46 years in prison.

Katsav, who denies all wrongdoing, has taken a leave of absence from the ceremonial presidency, but has refused to resign. He did not attend the hearing.

For decades, the 61-year-old Katsav had been considered a lackluster but affable lawmaker, Cabinet minister and president until allegations surfaced last year that he was a predatory boss who forced sexual favors from female employees.

His four accusers worked with him either in the president's office or when he was tourism minister in the late 1990s. At least one client has said he threatened to make sure she never got another job if she refused to have sex with him in his office.

Katsav has said all of his accusers are seeking revenge because he fired them.

In an hour-long televised tirade before he stepped aside in January, Katsav insisted he was innocent and accused the media and the police of conspiring against him.

"I am not prepared to give in to blackmail, to lies," Katsav said at the time. "Truth is on my side."

Katsav's seven-year term is set to expire later this year.

The presidency, a mainly ceremonial post, was traditionally filled by statesmen and national heroes who were expected to serve as a moral beacon. Accusations that Katsav used his position to force himself on female employees have infuriated Israelis.

No sitting Israeli president has ever been charged with a crime. But the Israeli public has grown accustomed to the spectacle of politicians mired in scandals. Former Justice Minister Haim Ramon is now performing community service after being convicted in a separate sexual misconduct case.

Prime Minister Ehud Olmert, fighting for his political life following the release of a highly critical probe of last summer's Lebanon war, is under investigation for his role in the sale of a government-controlled bank and separate cases involving real estate deals.