Seema Parihar was once one of northern India's most feared bandits. Now she wants to be a member of Parliament. 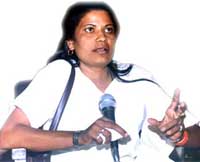 Parihar, who faces charges on 29 counts of murder and kidnapping, is running in a May 3 by-election to represent the Bhadoi district in for India's Lok Sabha, or lower house of Parliament.

And she has a precedent for such a transformation.

Devi was murdered, while still serving as a lawmaker in 2001, by one of the upper-caste Hindus she had fought against.

"I want to be another Phoolan," Parihar told The Associated Press in Bhadoi, about 300 kilometers (185 miles) southeast of Lucknow, the capital of Uttar Pradesh state.

"She (Phoolan) had done a lot for poor and downtrodden," Parihar said. "Unfortunately, she was killed."

Parihar surrendered to police five years ago, saying she'd had enough of a life of violence. She now preaches a message of peace.

"I have seen violence in my early days. This (violence) has not helped any one," she told a group of people at an election rally. "We want peace and justice for all. Vote for me."

Parihar, who is out of custody on bail, can run for elections because India's law only prohibits those who have been convicted from running for office. With India's backlogged legal system, that often takes years.

She is the Indian Justice Party's candidate for the Bhadoi parliamentary seat, which fell vacant after the incumbent died.

Parihar is not the only politician in Uttar Pradesh to face accusations of crime.

Traditionally politics in Uttar Pradesh state - like many others in India - has been dominated by local power brokers who often use violence to intimidate rivals' supporters.

Parihar starred in the 2004 film "Wounded," based on her life from the time she was captured and raped by a bandit to her rise as the head of a feared gang of bandits, locally called dacoits.

"If I win, I will start a rehabilitation program for former dacoits," she said.