The fatal fall of a Mexican circus trapeze artist during a show is under investigation by the state's workplace safety division. 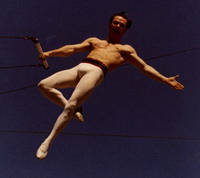 The California Division of Occupational Safety and Health is looking into whether the Circo Hermanos Vazquez provided sufficient safety mechanisms to performer Roberto Valenzuela, who fell headfirst Monday from drapery suspending him 40 feet (12 meters) above ground, said the agency's spokesman Dean Fryer.

The circus had traveled from Mexico for the show at the Whittier Narrows Recreation Area, said Sgt. Jacqueline Gonzalez. About 500 children and parents were in attendance.

County firefighters on hand to monitor the following act, which was to involve fire, responded after Valenzuela fell but were unable to save him, Gonzalez said.

"This is a tragedy for the whole circus family," Circo Hermanos Vazquez's general manager told a camera crew at the scene.

Founded by brothers Jose Guillermo and Rafael L. Vazquez in 1969, the circus has one troupe that typically tours in Mexico and another that performs for mostly Hispanic audiences in the U.S.

Circus officials said Valenzuela, 35, had performed with Circo Hermanos Vazquez for four years. Fryer said it appeared the performer maintained and set up his own equipment.

Cal-OSHA officials said they were reviewing Valenzuela's contract to determine whether he was a private contractor, which would preclude their jurisdiction over the investigation, Fryer said.