Turkey's highest court on Tuesday annulled a parliamentary vote for president in which the only candidate was a member of the Islamic-rooted ruling party. 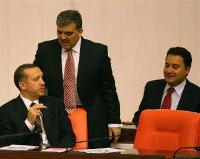 The Constitutional Court ruled that a necessary two-thirds quorum was not present for the vote in Parliament. The government spokesman said immediately after the ruling that it would seek the 367-vote quorum in another vote Wednesday, but that claim was quickly denied by a leading deputy, Sabullah Ergin, who said there would be no vote and that only a new timetable would be set.

In Turkey, the Parliament elects the president.

The elections have divided Turkey into pro- and anti-government camps and led many to call for early elections as a way to reconstitute Parliament  which is dominated by the Islamic-rooted governing party and find a consensus candidate.

Prime Minister Recep Tayyip Erdogan was meeting with his party after the court decision, and said he would make an announcement later in the day.

The government has said it would consider holding early general elections promptly.

"We would like the elections to take place as soon as possible," government spokesman Cemil Cicek said.

The court ruling followed enormous protests by hundreds of thousands of pro-secular Turks worried that the candidacy of Foreign Minister Abdullah Gul, a senior member of the ruling party, could enhance the role of political Islam and lead to an erosion of Turkey's long secular tradition.