Erika Sunnegardh comes back year after her debut

When last Erika Sunnegardh was seen, she had just become an overnight sensation. 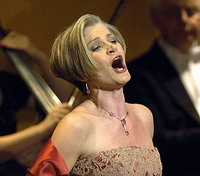 Erika Sunnegardh comes back year after her debut

That was a year ago, when the virtually unknown, 40-year-old soprano made her Metropolitan Opera debut substituting for an indisposed Karita Mattila in an internationally broadcast performance of Beethoven's "Fidelio."

Critics were encouraging to enthusiastic, noting her strong upper register but also some weakness in the lower voice. Her blonde good looks and her spirited performance on such short notice as the wife who fights to free her husband from prison helped win the public to her side.

Now she's back at the Met, singing a run of performances as the icy Chinese princess in Franco Zeffirelli's jaw-droppingly opulent production of Puccini's "Turandot."

In some ways, it is a role that suits her even better, since most of it is written very high and demands a soprano who can cut through heavy orchestration and a huge chorus.

On Saturday night, Sunnegardh attacked her entrance aria, "In questa reggia," with gusto, and those high B's and C's sailed forth cleanly and firmly into the large house. It is not a huge sound, but a penetrating one. She makes an uncommonly attractive Turandot as well, much slimmer of figure than most dramatic sopranos who take on the punishing role.

Sunnegardh's debut last year was a coup for Joseph Volpe, who was in his last season as Met general manager. His successor, Peter Gelb, has his own ideas about generating publicity, and the soprano does not appear to have any firm engagements at the house in future seasons.

In fact, her calendar for the next year shows her singing mostly in medium-size venues, from Scandinavia to Auckland, New Zealand, to Milwaukee. She is singing in Wagner's "Die Walkuere" at Aix-en-Provence and Salzburg, but as one of Bruennhilde's sisters rather than as the heroine herself.

It is not superstardom, but at least it is a solid career for the Swedish-born singer, who spent years waitressing in New York restaurants and doing other jobs to support herself while she studied and struggled to develop her voice.