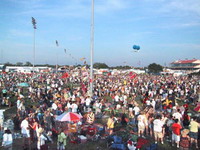 "It's very ritualistic food," said Sapir, who has at least one bowl of the gumbo from the Prejean's Restaurant booth each day of the festival. On Saturday, he had two. "I couldn't resist."

The vendors are from Louisiana, but some of their offerings are from farther afield: jama jama from Africa, Cuban sandwiches, yat ka mein (broth, noodles, vegetables and a bit of meat) from China.

"I charge through the gates to get this," said Meredith McLanahan, moments before biting into a softshell crab po-boy, breaded crab legs protruding from the soft French bread like cartoon whiskers. "This is my breakfast every day during Jazz Fest," she said.

For some food providers, this Jazz Fest marked their first since Hurricane Katrina. A number of festival regulars said they were happy to see the return of Creole Chef Catering, probably best known for its fried fish Ferdinand.

"The fish is really, really crispy, and the sauce is so good," said 19-year-old Nidia Hill of eastern New Orleans.

Co-owner of Creole Chef Catering, Keith Whitehead, wouldn't give away his recipe for the sauce - which he makes two 80-gallon pots of each day of the festival - but he did say ingredients include Creole mustard, garlic, shrimp and crawfish.

"I start every day at 6 o'clock, turning all the burners on, mixing all the ingredients," he said. He also makes 80 gallons of seafood gumbo each day, he said.

It has not been an easy return to New Orleans, Whitehead said. His home in the city's Gentilly neighborhood flooded, and for a while, much of his family and many friends were living in Atlanta, he said.

During last year's Jazz Fest, he was trying to rebuild his home, as well as the homes of his mother, brother and sister. He is still not back in his home, though it is gutted. He said he is torn about whether to demolish and build higher or just add a second story.

Regardless of what he decides, he said he could not be happier to be back at Jazz Fest.

"It feels good," he said, smiling wide as he watched workers serve out dish after dish of fish, gumbo and bread pudding to hungry fest-goers. "I love working at Jazz Fest. The festivals are always a lot of fun, and we've had a lot of people asking about us, where we've been."

Also back at the festival for the first time since Hurricane Katrina are Sharon and Guilherme Wegner's alligator with fried jalapenos and onions, crawfish bisque from Li'l Dizzy's Cafe, oysters on the half shell from Smitty's Seafood Restaurant and alligator pie and crabmeat stuffed shrimp from Cajun Nights Catering.