Thousands of hours were spent on repairing fractured roads and trails since a deluge last fall closed this popular U.S. park for the first time in a quarter-century. 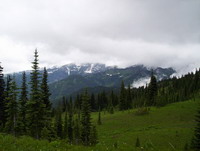 Even as they prepare to reopen one of the Pacific Northwest's most popular attractions on May 5, officials say work still remains.

"Every road, every campground, every trail throughout the park was damaged to some extent," said Dave Uberuaga, superintendent of Mount Rainier National Park. "Facilities that had not been damaged in the whole history were wiped out."

Visitor centers and services will be open at each of the corners of the park, but people who expect to be able to drive through and stop at each will be disappointed.

Some segments of the popular Wonderland Trail will be impassible, Uberuaga said, and other paths also have substantial damage. Still more scarred trails are expected to be uncovered as the snow melts.

More than 2,000 people have volunteered to help repair the damage, and Uberuaga is eager to reopen the gates after the longest closure in park history.