America gets evidence against al-Qaida terrorist 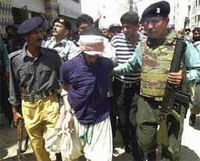 America gets evidence against al-Qaida terrorist

Before monitoring phone calls and e-mails or conducting searches, government agents must obtain warrants from a FISA court, where proceedings are secret.

Jim Gilbert, one of Paul's attorneys, declined comment when asked by the newspaper if he would challenge whether search warrants were properly obtained in this case.

Paul remains in jail. A message seeking comment was left on Sunday with Fred Alverson, spokesman for the U.S. Attorney's Office in Columbus.

Assistant U.S. Attorney Dana M. Peters and Sylvia Kaser of the Justice Department's counterterrorism section said in court papers they will use evidence that came from monitoring phone calls or electronic communication obtained under the act. They also will introduce items and information seized under the act.

U.S. District Judge Gregory Frost has scheduled a hearing May 16 on classified evidence in the case. The government can ask the judge to allow Paul's attorneys to receive only parts of documents, photographs or recordings, or to substitute summaries or statements of relevant facts for the entire document, the newspaper said.

After reviewing the classified information, Paul's attorneys must notify the court and government if they intend to use any of it in Paul's defense. Again, the government can ask the judge to allow only an edited version or summaries of statements at trial.

Paul learned hand-to-hand combat and how to use grenades and assault rifles at an al-Qaida camp in Afghanistan in the early 1990s, according to a federal grand jury indictment. He then joined the terrorist group in Pakistan and told al-Qaida members he was dedicated to committing violent jihad, prosecutors allege.

Court records show Paul is linked to Nuradin Abdi, a man accused of plotting to blow up the shopping mall. A laser range finder and a night vision scope seized from Paul's residence are listed among items that the government intends to use as evidence in Abdi's case, according to the records.

Abdi is scheduled for trial in September.

A third Columbus man, Iyman Faris, was sentenced in 2003 to 20 years in prison for a plot to topple the Brooklyn Bridge.