An Ethiopian rebel group denied on Saturday any role in a grenade attack in eastern Ethiopia that killed one person at the home of a family mourning a relative killed in a rebel attack earlier this week. 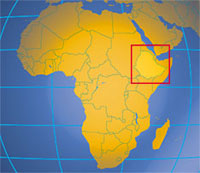 On Friday, government spokesman Zemedkun Tekle said that the rebel Ogaden National Liberation Front was responsible for the grenade attack in the eastern Ethiopian town of Jijiga, some 700 kilometers (435 miles) east of the capital, Addis Ababa.

The accusation "has no basis in reality," the Ogaden National Liberation Front said in a statement sent to The Associated Press. "We wish to make clear that it is the policy of the ONLF not to deliberately harm civilians or carry out military operations targeting civilians."

The rebel group claimed that the Thursday grenade attack stemmed from a dispute between soldiers of two tribes, but they did not give details about what the dispute was.

The front had claimed responsibility for an attack on a Chinese-owned oil exploration field in eastern Ethiopia on Tuesday, killing 65 Ethiopians and nine Chinese. The group said in a statement sent to media organizations that six other Chinese workers "were removed from the battlefield for their own safety."

The Ethiopian rebels promised on Friday to work with the Red Cross to return the six as soon as possible but said that government military operations placed the workers in danger.

The group said it would resume fighting after the Chinese workers were transferred to the International Committee of the Red Cross.

Sun Qing, a spokeswoman at the Chinese embassy in Addis Ababa, would not discuss efforts to gain the release of the Chinese workers.

The rebels said again that no foreign company should try to work in the Ogaden region, a large state along the Somali border. The group says it is fighting for the region's right to self-determination.

The Chinese government has condemned Tuesday's attack and rejected the group's warning.