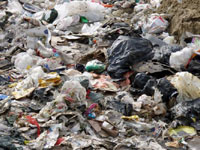 Shopkeepers in the English town, population 1,500, have agreed to stop using disposable plastic bags in a bid to help the environment and cut waste. From Saturday, Modbury's 43 stores stopped giving out plastic bags to customers. Paper sacks and cloth carrier bags will be offered instead.

The town, about 225 miles (360 kilometers) southwest of London, has also declared a bag amnesty, allowing residents to hand in plastic bags that have piled up at home. They will be sent for recycling.

The Modbury ban was the idea of Rebecca Hosking, a local resident who saw the bags' effect on marine life while working in the Pacific as a wildlife camerawoman.

She said response in the town so far had been "really positive."

"Modbury's quite an old-fashioned town and a lot of people have wicker baskets to go out shopping anyway," Hosking told Sky News television.

The Worldwatch Institute, an environmental research agency, estimates that 100 billion plastic bags are discarded each year in the United States alone. More than 500 billion are used annually around the world.