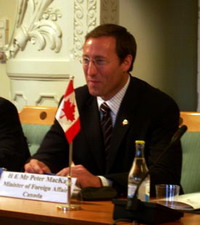 NATO has a good chance to loose the Afghan war because of the worsening of the government of U.S.-backed President Hamid Karzai, the former U.S. ambassador to the United Nations Richard Holbrooke said Saturday.

The North Atlantic Treaty Alliance has 36,000 troops under its command in Afghanistan and the United States has deployed an additional 11,000 troops in the eastern border region with Pakistan.

Still, Taliban guerrillas have vastly expanded their activities during the past year. Insurgents have now returned to many regions outside their traditional strongholds in the east that were rebel-free since the 2001 U.S.-led invasion of Afghanistan.

Holbrooke said he was struck during his visit by how unpopular Karzai's government had become because of corruption caused by the country's burgeoning drug problem.

"I have heard increasingly that the government has lost its momentum," he said.

"I can sense a tremendous deterioration in the standing of the government. Afghans are now universally talking about their disappointment with Karzai. Let's be honest with ourselves ... the government must succeed or else the Taliban will gain from it."

At a news conference later, Canadian Foreign Minister Peter Mackay said the fate of the allied operation in Afghanistan - in which 54 Canadian soldiers have died so far - hangs by a thread.

He said Canada has been disappointed by a lack of solidarity within NATO to share the burden of the Afghan operation.

He also called on Pakistan to do more to secure its border with Afghanistan saying there are as many as 4 million refugees "just inside the Pakistani border and they are a source for recruitment" for Taliban guerrillas.

NATO Secretary-General, Jaap de Hoop Scheffer added that: "If we lose ... the consequences will be felt not only in Afghanistan but in all nations."

Holbrooke, who was instrumental in formulating U.S. policy toward the United Nations, Africa, Asia and the Middle East, remains best-known for his role as the architect of the 1995 Dayton Peace Agreement which ended the war in Bosnia.

Some have mentioned him as the next U.S. secretary of state if a Democratic candidate wins the next presidential election.

"We don't want to see the kind of political chaos (in Kabul) that in Baghdad is destroying the coalition effort," he said.

He lambasted the U.S.-financed effort to train the Afghan police, saying it had produced a force that was corrupt and incompetent.

"The U.S. training program (for the police) under DynCorp is an appalling joke ... a complete shambles," he said. He referred to Falls Church, Virginia-based DynCorp International Inc. a major provider of security and defense services in Afghanistan, Iraq and other troublespots.

"I don't want to appear negative, but unless we are honest about the problem we will continue saying year after year that we are making progress, but have lost ground. We all know where that leads."