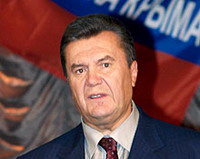 President Viktor Yushchenko and other political leaders can overcome the political crisis in Ukraine by agreeing that a new ballot is the only way to overcome the nearly four-week-old political stalemate. That is the compromise suggested by premier to hold early parliamentary elections.

But Viktor Yanukovych said the decision must come out of political negotiations - not be forced by presidential decree.

"If we sit down and come to the conclusion that we have to hold elections, then such a decision will be taken," Yanukovych told reporters. "But then it will ... be based on political consultations and agreements. Then we will go to our voters and say here is the situation."

Yanukovych's conciliatory comments came a day after the European Union expressed concern about the lack of progress in resolving the standoff in this ex-Soviet republic. Yanukovych has called Yushchenko's April 2 decree dissolving the legislature and announcing snap elections for May unconstitutional and has appealed to the Constitutional Court.

As the court began deliberations this week, however, Yushchenko canceled his decree and issued a new one, pushing back elections to June 24.

The move appeared to be an effort to protect the president in case the court threw out his first order as unconstitutional.

Still, it was unclear how far Yanukovych was willing to move toward compromise. Speaking to supporters on Friday, he suggested holding early parliamentary elections simultaneously with an early presidential vote - something Yushchenko is unlikely ever to agree to.

The ongoing standoff has led to a collision of power in Ukraine's government but has so far had little noticeable effect on day-to-day life in this nation of 47 million. Parliament continues to meet; government ministries work as usual.

Supporters of Yushchenko's order to dissolve parliament planned a major rally for Saturday evening to be led by former Premier Yulia Tymoshenko.