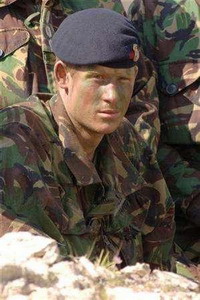 Prince Harry was threatened to become a target of the special squad of Shiite militants in Iraq if being deployed there with his army regiment, The Guardian newspaper reported Saturday.

The newspaper quoted a commander in the Mahdi Army, the militia loyal to radical Shiite cleric Muqtada al-Sadr, as saying the group had informants inside British army bases who would tip them off about the prince's presence.

"One of our aims is to capture Harry, we have people inside the British bases to inform us on when he will arrive," the newspaper quoted commander Abu Mujtaba as saying.

The Guardian said it could not substantiate Abu Mujtaba's claims and the British military dismissed them as propaganda.

Harry, 22, is a second lieutenant in the British army. His regiment, the Blues and Royals, is due to be deployed in Iraq in the next few weeks.

Royal officials announced earlier this year that the prince, who is third in line to the throne, would go with them. But this week military chiefs were reported to be reconsidering the deployment for fear Harry's presence could endanger other soldiers.

The Ministry of Defense would say only that deployments are kept "under constant review."

Abu Mujtaba told The Guardian that Harry would be a target not just for the Mahdi Army, "but every person who hates the British and the Americans will try to get him, all the mujahideen in Iraq, the al-Qaida, the Iranians all will try to get him."

The government announced in February that it would begin withdrawing 1,600 of the 7,000 British troops in Iraq this summer as it hands over control of southern Iraq to local forces.

But the past few weeks have seen a surge in violence, with 11 British soldiers killed in Iraq this month. In all, 145 British troops have died there since the 2003 invasion.