Segolene Royal, struggling in her quest to become France's first woman president, pinned her hopes on a debate Saturday with potential kingmaker Francois Bayrou that she thinks could win over his middle-ground voters to her leftist program. 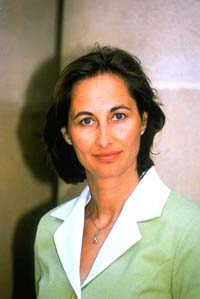 Lawmaker Bayrou finished a strong third place in the first round of voting, behind Socialist Royal and conservative front-runner Nicolas Sarkozy. Royal heads into the May 6 runoff against Sarkozy at a disadvantage, and is scrambling to woo Bayrou and his nearly 7 million voters to her camp.

Bayrou, who rode to popularity by tapping voter frustration with the traditional left and right, has refused to endorse either candidate - but agreed to Royal's invitation to a public debate.

"Join me!" Royal said at a rally Friday night near Lyon, appealing to a disparate arc of voters from the far left to the midstream who supported Bayrou.

"What unites us is more important than what distinguishes us," she said.

Royal is aiming in the debate to demonstrate to Bayrou's voters that the two are politically compatible, despite Bayrou's fierce criticism of her economic program.

Royal would hike government spending in a bid to boost employment and heal social ills such as tensions in immigrant-heavy housing projects. Bayrou and other critics say the plan would stifle much-needed growth and bury the country further in debt.

The debate itself turned into a political melodrama this week, when broadcaster Canal Plus agreed, then refused, to host it. Royal and others accused Sarkozy - who has powerful friends in the French media and business worlds - of interfering.

Canal Plus denied that it bowed to pressure from Sarkozy, and he denied having any role.

As France's heated presidential election rushes into a climactic final week of campaigning, the battle between Royal and Sarkozy has focused more on personality than on their sharply different recipes for reviving France.

Royal is working to make the runoff a referendum on the character of the pugnacious and blunt former interior minister, whose platform of economic reforms and tough measures against crime and immigration scare many in the opposing camp.

She called for preserving "civil peace and social harmony" in her Friday night rally and described Sarkozy's plan for France as "a system of war of everyone against everyone."

Sarkozy beat Royal by more than 5 percent in the first round, and led Royal 52.5 percent to 47.5 percent in an Ipsos poll released Saturday. The poll of 1,255 people was conducted April 25-27 by telephone. No margin of error was given.