Police fired rubber bullets and a water cannon at hundreds of protesters in Estonia's capital in a second night of rioting by ethnic Russians angry over the removal of a Soviet war memorial - an act that also aggravated tensions with the Kremlin. 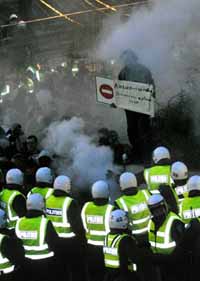 As some people waved Russian flags, demonstrators threw bottles and rocks for several hours Friday night, then largely dispersed after officers advanced on the crowd and began making arrests. Several parked cars were smashed and some billboards were set on fire.

The clashes underlined the feuding between ethnic Estonians and Russians since the breakup of the Soviet Union. Many Russian-speakers contend they are discriminated against, and they are being supported by a newly oil-enriched Russia that is growing increasingly assertive in the region.

Julia Garanza, a police spokeswoman, said more than 300 people were taken into custody and 10 protesters suffered minor injuries, including one who had to be hospitalized.

She said small bands of protesters were roaming the downtown area, breaking shop windows and looting stores. Two department stores were damaged, their display windows shattered and some merchandise stolen. A liquor store was also burglarized.

Cars passing the clashes in Tallinn's Freedom Square honked their horns as a sign of support for the protesters, who were mainly ethnic Russians outraged by the government taking the "Bronze Soldier" statue from downtown.

Estonia's Russian-speakers - roughly a third of the 1.3 million population - consider the monument erected in 1947 as a tribute to Red Army soldiers who died fighting Nazi Germany. Many ethnic Estonians consider it a painful reminder of hardships under Soviet rule.

Similar problems have arisen elsewhere in former Soviet areas where minority ethnic Russians have complained of discrimination and have increasingly tried to make themselves heard. Russian speakers in Latvia recently held protests against proposed language laws, gaining moral support from the Kremlin. And Russia itself frequently brings up the issue of alleged discrimination in its talks with both Estonia and Lativa over border issues.

The worst unrest since Estonia regained independence from the Soviet Union in 1991 erupted late Thursday as workers began preparations to remove the 6-foot-tall (1.8-meter-tall) statue. One man was stabbed to death and dozens were injured, including 12 police officers.

Authorities then removed the memorial before dawn Friday. The statue of a Red Army soldier with rifle slung over his back was being held at an undisclosed location, said Andreas Kaju, a Defense Ministry adviser.

Ethnic Russians also are angry that the government wants to exhume the bodies of 14 Soviet soldiers believed to be buried in a grave beside the memorial site and rebury them in a military cemetery. The Defense Ministry has refused to begin the exhumations while the unrest continues.

Russia reacted bitterly, with lawmakers voting to urge the Kremlin to either break off diplomatic relations or impose economic sanctions.

"The Estonian government has spat on values," Russian news agencies quoted Foreign Minister Sergey Lavrov as saying. "I cannot understand it when people try to lay blame for historical events on somebody, or try to compare communism with Nazism."

"All this had nothing to do with the inviolability of graves or keeping alive the memory of men fallen in World War II," Ilves said.

When authorities decided to remove the statue, they stepped on one of the few remaining symbols left for minority Russians in Estonia to revere - a sense of pride in defeating Nazi Germany.

Officials argue the monument and graves should be moved to a cemetery because their location near a busy intersection is not a proper place resting place for the victims. Russian-speakers feel the real reason is the desire of Estonian nationalists to belittle Soviet contributions.

Soviet troops invaded the Baltic countries - Estonia, Latvia and Lithuania - in 1940, but were pushed out by the Germans a year later. The Red Army retook the three states in 1944 and occupied them until the collapse of the Soviet Union in 1991.

Some Tallinn residents said they were not surprised by the riots because Russian-speakers have felt marginalized since Estonia split from the Soviet Union. Many complain language laws requiring proficiency in Estonian makes it hard for them to get work or citizenship.

"This was waiting to happen," said Epp Saar, a 43-year-old of mixed Estonian and Russian descent. "There has been a feeling for a long time that pressure has been building and things will just explode any day."