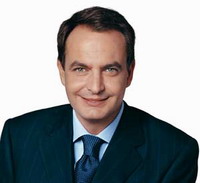 Zapatero chose a book of poems by Spanish poet Antonio Machado who was one of the leading figures of the Spanish literary movement known as the Generation of '98.

"A country of citizens that read is a cultivated, mature and sensitive country," de la Vega said in the news conference after the weekly Cabinet meeting.

The April 23 date coincides with UNESCO's World Book Day to promote literature and commemorate Cervantes and English dramatist William Shakespeare, who both died on that date in 1616.

Machado is being remembered this year with different cultural activities in the city of Soria where he wrote, fell in love and lived from 1907-1912.