Japan's Emperor Akihito and Empress Michiko will have a 10-day trip in late May to Sweden, Britain and the three Baltic countries. 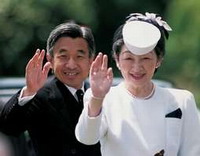 The imperial couple will depart Tokyo on May 21 for Stockholm, where they will meet with Swedish King Carl XVI Gustaf and Queen Silvia, the Foreign Ministry said in a statement.

They will also partake in celebrations marking the 300th anniversary of the birth of Sweden's most famous scientist, Carl Linnaeus, it said.

Linnaeus is best known for creating the system that became the international standard for scientifically classifying living organisms.

For the last leg of their trip, Akihito and Michiko are scheduled to go to London on May 27, where they will meet with Queen Elizabeth II and attend further events celebrating Linnaeus.

The imperial couple will return home on May 30.

Under Japan's postwar constitution, the Japanese royal family has no official political power but plays an important symbolic role in society.