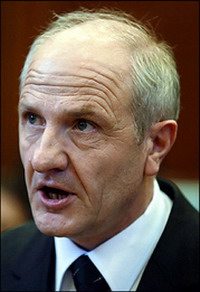 U.N. Security Council ambassadors are urged by Ethnic Albanian leaders touring Kosovo on Friday to support their province's quest for independence from Serbia.

Kosovo's President Fatmir Sejdiu said they presented "the arguments why Kosovo should be independent and why there can be no other variations," and pledged to the U.N. diplomats that the province was committed to protecting its beleaguered Serbian minority and other communities.

"Kosovo is determined and clear in building a democratic and modern state for all of its citizens," Sejdiu said.

Fifteen diplomats were meeting ethnic Albanian and Serbian leaders and will travel to remote villages and towns to hear from people affected by the ethnic hatreds that claimed the lives of thousands and brought destruction to the province in the 1998-99 war and in its aftermath.

What the U.N. ambassadors learn is meant to help inform the council in its debate over whether to approve a plan to grant Kosovo independence under the supervision of the European Union and the United States.

The plan, drafted by U.N. envoy Martti Ahtisaari, has been endorsed by ethnic Albanian leaders, who expect Kosovo to gain independence by the end of May, but rejected by Serbian officials, who have warned of partition of the province's Serb-dominated north if Kosovo is allowed to break away.

"I believe a lot of progress has been made here," Khalilzad said. "But, we recognize that there's a lot more that needs to be done and the status issue is an important issue that needs to be resolved and we will do so in the coming weeks."

Kosovo has been under U.N. and NATO administration since the end of the war between Serb forces and ethnic Albanian separatists. NATO maintains a 16,500-strong force in the province to keep the peace.

"For Kosovo and its people there is only one solution - full independence that will guarantee peace and stability," said Hashim Thaci, a former rebel leader turned politician.

But Serbian representative Randjel Nojkic warned diplomats that "there's no Serb that thinks Kosovo's independence is a basis and opportunity for Serbs to live in this territory."

Underlining the prevailing ethnic tensions, about 10,000 Serb refugees demonstrated as the U.N. mission visited the region, to press their case that they still want to return to homes they fled or were forced to leave after the war.

Some 200,000 Serbs and other minorities fled during a period of revenge attacks by ethnic Albanians that followed the crackdown by Serb forces. Only a small number of Serbs have returned since then, and many of them have faced attacks.

Some 10,000 Kosovo Albanians were killed during the war, which ended after 78 days of NATO air strikes aimed at ending the Serbian government's crackdown.

Kosovo is the latest stop in the council's four-day visit, which included talks with European Union and NATO officials in Brussels, Belgium, who urged the ambassadors to endorse Ahtisaari's plan.

U.S. and EU officials have warned that delaying a resolution on Kosovo's status could trigger another round of interethnic violence in the province.

In Serbia's capital, Belgrade, Serbian Prime Minister Vojislav Kostunica told the visiting officials that allowing Kosovo to split from Serbia would violate the U.N. Charter, which guarantees that member states' borders are unchangeable.

The U.S. and EU nations support plans to give Kosovo eventual independence, but Russia was leading a group of nations that oppose such a move, saying it could set a precedent for other independence-seeking regions or provinces.

The division among the veto-holding permanent Security Council members - the U.S., Britain, France, Russia and China - is shaping up as one of the thorniest issues in the increasingly difficult relationship between the West and a resurgent Russia.

"We are on the eve of taking important decisions in New York and we did not want to go lightly on those decisions and so we wanted to be fully informed," said Belgium's U.N. Ambassador Johan Verbeke, who is leading the mission. "We now go to the field to see for ourselves how that reality translates in the field."