Movie pirates are catching unsuspecting customers in their webs on the streets of China's capital, one week before "Spider-Man 3" hits the big screens. 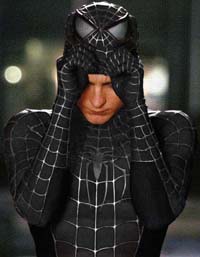 The movie is set to open May 4 in the United States, but the pirates got a jump on things in China - even if it was not quite the real thing.

One pirated DVD in Beijing has a "Spider-Man 3" cover showing the hero played by Tobey Maguire in a black spider outfit. But the DVD inside is a copy of the 2001 movie "Earth vs. The Spider."

It is common for pirated copies of movies to be on sale in Beijing within days of their release, but the first copies are usually poor and sometimes dubbed in Russian.

The copy was being sold on Jianguomenwai Street, Beijing's main east-west avenue, in front of a sign that said "The sale and purchasing of illegal, pirated video disc is strictly prohibited."

"Spider-Man 3," released by Sony Corp.'s Columbia Pictures, is the third film in the Spider-Man series based on the fictional Marvel Comics hero. Its returning stars also include Kirsten Dunst.