Britain and the U.S. officially ratified a bilateral extradition treaty that makes it easier to transfer individuals, including terrorism suspects, between the two countries. 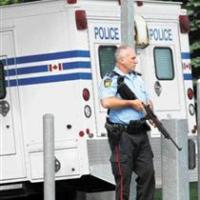 The new treaty expands the definition of extraditable offenses to include any crime punishable by a sentence of one year or more, a statement by the two governments said. The previous treaty was limited to a list of specific offenses.

The new treaty also allows convicted offenders who are accused of a crime by authorities across the Atlantic to be "temporarily surrendered" to stand trial in the other country before they finish serving their existing sentence, the statement said.

It allows authorities to prosecute suspects for crimes other than those for which they were extradited as long as the authorities in the other country consent.

It also eases the burden of proof on U.S. authorities. They no longer have to build a prima facie evidential case to support extradition requests. Now they need only provide information similar to what is needed to justify an arrest, the statement said.

Safeguards have been added to the treaty to protect the human rights of individuals of any nationality who are extradited from Britain to the U.S., a Home Office spokeswoman said on condition of anonymity in line with government policy.

For example, Britain would refuse a request if the suspect could face the death penalty in the U.S. or if the suspect were going to be sent to Guantanamo Bay without the prospect of a trial, she said.

The temporary surrender powers are expected to be used next month when a British judge hears an extradition hearing for Muslim cleric Abu Hamza al-Masri.

Al-Masri, serving a seven-year British sentence for fomenting racial hatred and urging his followers to kill non-Muslims, is charged in the U.S. on an 11-count indictment with trying to set up a terrorist training camp in Oregon, conspiring to take hostages in Yemen and facilitating terrorist training in Afghanistan.

The new treaty replaces previous extradition arrangements between the U.S. and Britain from 1972 and 1985.