Americans and Mexicans want Osama bin Laden executed if caught other countries not.

According to the AP-Ipsos poll, the bulk of Americans and a slim majority in Mexico want Osama bin Laden executed if caught, but most people in seven other countries would rather he spend life in prison. 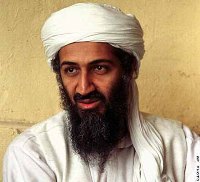 Americans and Mexicans want Osama bin Laden executed if caught other countries not.

In all nine nations surveyed, markedly more people would choose the death penalty for the al-Qaida leader than for run-of-the-mill murderers, even in nations with little taste for capital punishment.

Americans also prefer execution over prison for murderers by greater margins than people in the other countries. Of the nine countries polled, only the U.S. and South Korea have the death penalty, although South Korea currently has a de factor moratorium on capital punishment and hasn't executed anyone in nine years.

The poll underscores stark differences between the United States and many of its allies over the death penalty at a time when U.S. treatment of terror-war detainees, some of whom could face execution, has been a major irritant in their relations.

"It's my way of saying no to something," said Walter Bain, 89, a retired Navy petty officer from Washington state, who prefers the death penalty to prison. "I don't like the idea of a person walking down the street and shooting someone in cold blood just for exercise."

Though several top al-Qaida operatives have been captured, bin Laden remains free, with some officials saying he is hiding along the Pakistan-Afghan border. President George W. Bush vowed to capture bin Laden, dead or alive, shortly after the attacks of Sept. 11, 2001.

Given a choice of capital punishment for bin Laden or imprisonment, 62 percent in the United States supported executing him, while 36 percent chose prison. More than one-third of those preferring life imprisonment for convicted murderers said they would support bin Laden's execution.

"He's acting out of pure hate," said Tieara Causell, 19, a day-care provider in Michigan, who thinks ordinary murderers should be imprisoned. "What he's doing is horrible, and I think he should die."

Only in Mexico, where people chose the death penalty over prison for bin Laden by 54 percent to 35 percent, did sentiment run close to that in the United States. Opinion ran strongly toward prison in Britain, Canada, France, Germany, Italy, South Korea and Spain, in some cases by more than two-to-one margins.

Women were likelier than men to favor life imprisonment over the death penalty for murderers in all countries surveyed except Canada, Mexico and Germany, where the sexes were about even. Support for capital punishment also ran lower for people who are better educated, have higher incomes or are young.

South Korea, which has the death penalty, was the native country of Seung-Hui Cho, whose Virginia Tech shooting rampage claimed 32 lives, suggesting Seoul might not have objected had Cho a permanent U.S. resident not taken his own life and instead been sentenced to death.

In several countries, the public so opposes capital punishment that the matter seldom becomes a political issue. Reflecting Italian sentiment, since 1999 when a death sentence is commuted anywhere or a nation abolishes capital punishment, the city of Rome bathes the Colosseum in golden light at nighttime.

"He should serve life in prison without parole, away from any contact that could allow him to communicate and harm again," Mauro Cosmai, 59, a Rome university psychology professor, said about bin Laden.

In the United States, the preference for execution over prison for murderers in general was 52 percent to 46 percent. Those favoring prison slightly outnumbered death penalty supporters in Mexico, while in the remaining seven countries prison was the overwhelming preference.

"I don't believe in a society when `an eye for an eye' system is practiced," said Katrin Beissert, a 16-year-old high school student from Karlsruhe, Germany.

Support for executions measured higher in each country when the question was phrased differently.

Asked whether they favor or oppose the death penalty for murderers, without other choices for punishment, Americans backed it by 69 percent to 29 percent. That was similar to results in South Korea and Mexico. Capital punishment was supported by a slim majority in Britain but opposed by most in Canada, France, Germany, Italy and Spain.

Despite broad support for executions, nearly six in 10 in the United States said abolishing the death penalty probably would not change the number of murders. Analysts say support for execution goes beyond a belief in deterrence to peoples' feelings about justice, revenge and keeping criminals off the streets.

The poll also found that 69 percent in the United States prefer lethal injections for executions, with the rest scattered among hanging, firing squads, electrocution and gas chambers.

The AP-Ipsos poll was conducted in February in each country except Canada, where it was compiled from April 3-5. There were about 1,000 telephone interviews in each country, except for 1,200 conducted in person in Mexico. The polls had a margin of sampling error of plus or minus 3 percentage points.