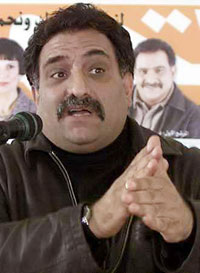 An Israeli Arab politician wants to return to Israel. The only thing that makes him stop is fuss over his aiding the enemy.

"My stay outside is temporary," Azmi Bishara said in a phone interview from Doha, Qatar.

A court in the Israeli town of Petah Tikva said Wednesday that Bishara, who resigned from parliament this week, was suspected of aiding enemies of the state in times of war, passing intelligence to the enemy, contacting foreign agents and receiving money in violation of anti-money laundering laws.

"In the next few weeks, I am not thinking of surrendering to their rules," Bishara told The Associated Press. "Let's see what happens after the media campaign in Israel against me calms down, and they start to look at issues rationally."

Bishara, 50, who left Israel three weeks ago, said he does not consider himself a fugitive.

"I am not looking for political asylum, but for ways to go back," he said, adding that he has a house in the northern city of Haifa, a rented apartment in Jerusalem where his wife comes from, and an office in Nazareth - his constituency.

No charges have been filed against Bishara. Some of the offenses of which he is suspected occurred during Israel's war against the Lebanese militant group Hezbollah last July and August.

"These are serious charges in their (Israeli) language," Bishara said. "Particularly because they refer to time of war. But they are against Azmi Bishara, who never fought anyone, except with words, articles and books."

Since joining parliament in 1996, Bishara has antagonized many Jewish Israelis by meeting with some of the country's bitterest enemies, including the leaders of Syria and Hezbollah.

He is a champion of equal rights for Israel's Arab minority. He also advocates replacing Israel with a binational state that would include citizenship for the 3.4 million Palestinians in the West Bank and Gaza Strip.

Israel rejects the plan as spelling the end of the Jewish state.